Leo Varadkar: We are not ready for one metre social distancing 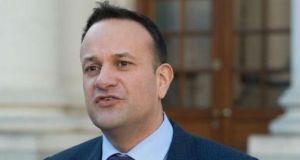 Ireland has not suppressed the spread of coronavirus enough to reduce social distancing guidelines from two metres to one metre, the Taoiseach has said.

Many businesses have said they would be unable to reopen unless the social distancing guide is brought down to one metre.

Leo Varadkar defended the existing guideline saying that two metres is safer than one metre if in the vicinity of a person with the virus.

“Before we can relax that rule and maybe reduce it to one metre, which I know a lot of people would like, we just need to see the virus come down a bit more. We’re not at that point yet, but I think there’s a good chance we get there, just not quite yet,” he told Dublin radio station FM104.

The State’s chief medical officer, Tony Holohan, on Wednesday told the Government there will be no immediate change to the current two-metre rule for physical distancing.

Mr Varadkar thanked the public for their response to the guidelines to date and said if they had not been introduced there could have been 30,000 deaths from Covid-19.

The Taoiseach also said a proposal to resolve the issue of women on maternity leave being excluded from the Temporary Wage Subsidy Scheme should be signed off by the Cabinet today. He explained that there are 2,000 women affected by this anomaly because they were on maternity leave when the temporary scheme was introduced and were subsequently removed from payroll by their employers, meaning they were not eligible for the scheme.

When asked about advice for the public keen to enjoy the good weather this bank holiday weekend, Mr Varadkar said he understood how people wanted to get out and they could do so for exercise, and to meet family and friends outdoors in groups smaller than four. They should also wear sunscreen, he added, but he would not be going outside the garden himself this weekend, he said.

“I don’t want to give my press officer a heart attack.”

On the issue of face masks, the Taoiseach said they should be viewed as “an extra” but they were not “some magic shield”. He said he wears a plain cloth one himself. “People have stopped sending me socks and they’re sending me masks. I now have a few nice ones. But I don’t wear a surgical mask as I don’t want them to run out.”

Mr Varadkar said he wants to accelerate the Government’s roadmap for reopening the country, but that a judgement call cannot be made until next week when the figures are known “and we can see if we’re moving in the right direction.” Phases can be brought forward if the virus numbers are kept under control, he said.