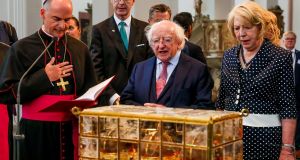 President Michael D Higgins and his wife Sabina Higgins at St Kilian’s Cathedral in Würzburg on the third day of the State visit to Germany. Photograph: Maxwell’s

“It important for us to recognise the complexity in this population of 80 million,” said Mr Higgins. “There is a long old note that is there, and there is a new contemporary energy.”

John Lynam is moving from the embassy in Beijing to open the new consulate general, responsible for the states of Hesse, Rhineland Palatinate and Saarland – home to 10 million people.

At the gathering, the President s also paid tribute to Irish Ambassador to Germany, Michael Collins, who is retiring from the diplomatic service after more than 46 years.

“For all he has done for Ireland, míle buíochas,” he said.

The President also encouraged his audience to visit Galway as European City of Culture 2020.

From just 8,000 visitors from Germany in 1965, 850,000 visited Ireland last year – doubling in the last decade to make Germans the third-biggest market tourism group to come Ireland.

“The image of Ireland is still extremely strong as a destination to get away from it all,” said Niall Gibbons, chief executive of Tourism Ireland, in Frankfurt.

At Würzburg town hall Mr Higgins said he hoped dynamic grassroots contacts between the city, Cavan and Wicklow would be replicated by other communities across Germany and Ireland.

In Frankfurt Lucia Puttrich, European minister for the state of Hesse, insisted Germany would “do everything in its power” to defend the Northern Ireland peace process, avoid a no-deal Brexit and a hard border.