Build-up of plastics on Little Skellig ‘getting worse’ 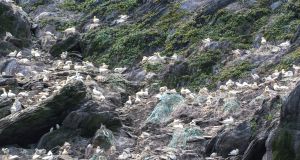 Gannet birds pluck artificial material from the ocean to build their nests on the Little Skellig colony off the Co Kerry coast. Photograph: Vincent Hyland

There is no “localised solution” to the continuing build-up of plastic materials on one of the Skellig Islands, wildlife officials have said.

The National Parks and Wildlife Service (NPWS) examined the problem last year but has said the issue is part of a broader pollution problem and the responsibility of various agencies.

It occurs when gannet birds pluck artificial material from the ocean to build their nests on the Little Skellig colony off the Co Kerry coast.

Vincent Hyland, a local conservationist who has pursued the issue since first identifying the material 30 years ago, said the build up is killing birds and getting worse.

There are about 35,000 nests on the rocky outcrop which is a popular sight for tourists on their way to its better known sister island Skellig Michael, the location of recent Star Wars film productions.

Gannets use seaweed to build their nests but inadvertently find discarded fishing nets and other plastic-based materials. They can ingest this and pass it into the marine food chain, or die from either choking or becoming entangled.

“This is not a localised problem,” a Department of Culture, Heritage and the Gaeltacht spokeswoman said on behalf of the parks service. “The gannets that breed here can travel great distances out to sea during the breeding season and, unfortunately, there is no localised solution that will resolve this problem definitively.”

It said the statutory responsibility for illegal dumping resides with local authorities.

“Plastic pollution, whether from the fishing industry or from more terrestrial sources, is a global problem and can have adverse effects on a range of marine wildlife species either through ingestion or entanglement,” it said. “Addressing such a widespread issue requires the co-operation of various stakeholders, nationally and internationally.”

However, that position drew some criticism. Mr Hyland said he was “shocked” by the response which was “indicative of this Government and everything that is wrong with its climate inaction”.

“Apart from the sheer volume of the plastic rope and gear that is there; the fishing rope itself breaks down into tiny micro-filaments and that enters the water,” he said. “Do we just leave it there for the next 400 years and hope that it goes away?”

Dr Stephen Newton, BirdWatch Ireland’s senior seabird conservation officer, said there were “intractable” problems with attempting to clean up Little Skellig – it cannot be done during the nesting season between April and November and after that there are problems with weather and access.

However, he said the official response was “a little selective” in terms of how far the gannets travel to collect the debris – he put it at a radius of about 10km, well within Irish waters.

“I do think we could do with a bit of tighter regulation on what happens to old fishing nets at ports. Can we have a bit of oversight locally?”

Dr Newton also said while there was a growing awareness around plastic sea pollution and efforts to clean beaches, this was not part of an official response.

“It’s not top down. I am sure the politicians would like to milk it in a way but it’s community driven,” he said.

The NPWS pointed to the European Marine Strategy Framework Directive which requires Ireland to reach good environmental status (GES) in the marine environment by the year 2020. Under it, waters will be assessed on a number of standards including biodiversity, fish stocks and contaminants.