President traces the footsteps of centuries of emigrants

Speaking during his State visit to Australia, President Michael D. Higgins says he will "take everything into account" before announcing if he is to run for a second term in office. Video: Simon Carswell 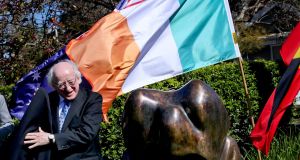 The image depicted in the sculpture was, as President Michael D Higgins put it, a “keening” mother “bent low by the crushing loss of her children”.

For the first public speaking event of his 19-day State visit to Australia, Mr Higgins chose a city park in Perth and the unveiling of a memorial to commemorate the country’s Irish Famine brides.

These were the teenagers who left behind their mothers in Ireland on the promise of bed and board in exchange for helping to populate the male-dominated Swan River Colony, which included many convicts, in west Australia.

Mary Ann Taylor was one of those girls. At the age of 17, she left a workhouse in east Galway and sailed on a ship called The Palestine to Australia. After arriving in the port of Fremantle, she marched 97km to an inland town. She went on to have 11 children by three relationships and 55 grandchildren.

“If you could imagine how they spread throughout the community and then multiply that by the number of Irish girls who came out, they were virtually the backbone of Western Australia, ” said her great-great-grandson William Marwick (78), standing in Market Square Park in Subiaco for the unveiling.

Now this upmarket suburb of Perth bears a very public memorial to the maternal ancestors of this very Irish population. The surrounding streets have long offered other reminders of the connection between the two countries: Cashel Lane, Dublin Close, Tipperary Mews and Wexford Street.

Next to the memorial, the President spoke on a long-running theme of his presidency: the ethical commemoration of complex histories and the lessons to be learned from them that could help the modern world.

“Is the plight of those risking everything today to cross continents and seas in search of refuge or a better life so different from the choices that faced our own people?” he asked, to applause.

A few hours earlier, at a welcoming “smoking ceremony”, the Aboriginal Walley family greeted the President and Sabina Higgins with burning sandalwood powder and by slashing peppermint leaves.

At the residence of the governor of Western Australia, Government House, Dr Richard Walley said Mr Higgins and his wife were walking in the footsteps of ancestors, both the native Whadjuk Nyoongar people and the Irish, and that they were leaving footsteps for future generations.

Among the people at Subiaco’s new memorial were many Irish who had also taken those steps.

Peter Murphy (65) was a “10-pound Paddy” who in 1969 had taken up the offer of a cheap ticket from Ireland to help the repopulation efforts in Australia under the “Populate or Perish” policy.

“It certainly has brought all the Irish and people of Irish heritage out of the woodwork,” said Murphy of the crowd who came out to greet the President.

Then there were the many more recent arrivals.

David Fitzpatrick (24) emigrated from Howth, Co Dublin, two years ago and works in a local bar. His sister encouraged him to travel to the area and the “huge Irish community” has kept him here.

“I was only home for five weeks,” he said. “It made my decision a lot easier to stay. Everything stays the same at home.”