Covid-19: Government ‘will announce details next week’ for lifting of Level 5 restrictions 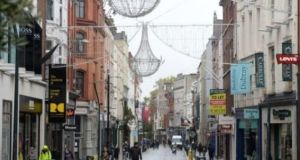 Damien English: Longer retail opening hours would be considered to facilitate demand, but it would not be the same as other Christmases

Minister of State for Employment Affairs and Retail Businesses Damien English has said the Government will announce details towards the end of next week for the lifting of Level 5 restrictions and the reopening of the retail sector.

Mr English told RTÉ radio’s News at One that plans will be announced when it was appropriate after the National Public Health Emergency Team (Nphet) and other experts have had time to analyse data from the first four weeks of Level 5 restrictions.

The Government had been engaging with the retail sector throughout the lockdown and recognised the difficulties being faced, he said. It was intended the Cabinet would be in a position to make an announcement by the end of next week, the Minister said.

Longer opening hours would be considered to facilitate demand, but it would not be the same as other Christmases, he warned.

There was a lot of work involved in planning the easing of restrictions, and Mr English said the Government understood the difficulties faced by the businesses and the public. “Of course the plans is to open as soon as we can.”

Once Nphet had reviewed and analysed figures, it would meet next week with the Cabinet to discuss the details and the Government could then make “the right decision” about how to reopen the country safely, Mr English said.

Plans would be put in place, and the Minister said it was “the full intention” the retail sector would reopen on December 1st. “We have always said that whenever the figures allowed we would reopen.”

Mr English rejected the claim by Ibec that Nphet was “flying a kite”.

The Minister said he recognised the efforts made by the public and that the best way to manage the virus was by “pushing it back.”

The virus spread in many settings, he said, and Level 5 restrictions had been necessary to stop social contacts and to stop the spread of the virus.