Peter Stringfellow: ‘king of clubs’ who was shunned in Ireland 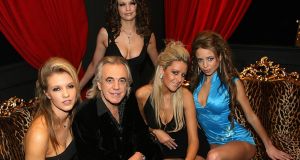 Peter Stringfellow with dancers during a photocall in 2006 at his new club in Dublin. Photograph: PA Wire

Peter Stringfellow made a fortune in Britain with his lap dancing clubs but found Dublin impervious to his dubious charms.

Stringfellow set up a lap dancing club in Parnell Square at the height of the Celtic Tiger in 2006 when Ireland was awash with borrowed cash.

The club which complemented its lap dancing services with a restaurant and late bar, was open until 3am six days a week. It was in keeping with the vulgarity and spendthrift nature of the times.

Unfortunately for Stringfellow, a determined campaign sprang up among local residents to stop the nightclub going ahead.

Stringfellow hoped to open the club in November 2005, just in time for the lucrative Christmas market, but protests meant he did not get his licence in time.

Stringfellow finally secured his licence to operate the club on two floors in Parnell Square in January 2006.

District Court Judge Ann Watkins said she sympathised with local residents who felt offended by the opening of such a club in their area, but she could only refuse a licence on the basis of the law.

Outside the court, Stringfellow claimed victory and said he was delighted with the outcome. Dublin, he opined, was now “an international city and part of Europe”.

Stringfellow’s victory was a pyrrhic one. Local residents kept up their protests and many corporate clients, who are critical to the survival of lap top clubs elsewhere, stayed away.

The club was finally closed in July 2006, just five months after it opened. Sabley Taverns, which ran the Stringfellow franchise in Dublin, blamed the protests outside.

The closure was “against everything this country is supposed to be about - advancement and democracy”, its then PR person John Sullivan said at the time. “This wouldn’t happen in any other modern capital city.”

Stringfellow expressed a hope that somebody else would take on the franchise, but there were no takers.