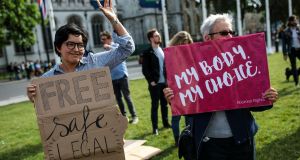 Pro-choice campaigners hold placards outside the Houses of Parliament in London calling for the same abortion laws in Northern Ireland as in the rest of the UK. Photograph: Getty

The UK supreme court has dismissed a challenge to Northern Ireland’s abortion law on technical grounds but a majority concluded it breaches the European Convention on Human Rights (ECHR).

The seven-judge panel found the Northern Ireland Human Rights Commission (NIHCR) did not have the competence to challenge the law on abstract grounds but suggested a challenge brought by a victim of the law could be successful.

“The challenge to the compatibility of Northern Ireland law with the Convention rights has however been fully argued, and evidence has been put before the Court about a number of specific cases. It would, in the circumstances, be unrealistic and unhelpful to refuse to express the conclusions at which I would have arrived, had I concluded that the Commission had competence to pursue the challenge,” the court’s deputy president Lord Mance said, handing down the judgment.

“I would have concluded, without real hesitation at the end of the day, that the current state of Northern Ireland law is incompatible with article 8 of the Convention, insofar as it prohibits abortion in cases of fatal foetal abnormality, rape and incest.”

Unlike other parts of the UK, the 1967 Abortion Act does not extend to Northern Ireland. Northern Ireland only permits abortion in cases where a woman’s life is at risk or if there is a risk of permanent and serious damage to her mental or physical health. Anyone who unlawfully carries out an abortion could be jailed for life.

The NIHRC challenged the law on the basis that it was incompatible with article 3 (the prohibition of torture and of inhuman or degrading treatment), article 8 (the right of everyone to respect for their private and family life) and article 14 (the prohibition of discrimination) of the ECHR.

The court found that the NIHRC did not have standing to bring the proceedings because they were not instituted by identifying any unlawful act or any potential victim of it, although three justices dissented from that conclusion.

Four of the seven justices considered, however, that the law in Northern Ireland is disproportionate and incompatible with article 8 of the ECHR insofar as it prohibits abortion in cases of fatal foetal abnormality, rape and incest.

“If an individual victim did return to court in relation to the present law, a formal declaration of incompatibility would in all likelihood be made,” the judgment said.

The judgment comes as politicians at Westminster are under pressure to legislate to change Northern Ireland’s abortion law following last month’s referendum in Ireland.

The Northern Ireland Assembly voted in February 2016 against legalising abortion in cases of fatal foetal abnormality and rape or incest.

Prime minister Theresa May’s government has argued that abortion is a devolved issue so only Northern Ireland’s politicians at Stormont should decide if the law should be changed.

Human rights, however, remain the preserve of Westminster and Lord Kerr told the court that, although its finding that Northern Ireland’s law was in breach of international human rights law were not technically binding, politicians should take note.

“The comprehensive discussion of the judgments of the question of compatibility, although not in any sense binding, must nevertheless be worthy of close consideration by those in whose power it lies to decide whether the law should be altered,” he said.

Northern Ireland Secretary Karen Bradley, responding to an urgent question in the House of Commons on Thursday, said: “The government is carefully considering the judgment and its implications.

“No formal declaration has been made by the court and the appeal has been dismissed. But the analysis and comments from the court on the issue of incompatibility will be clearly heard by this House and politicians in Northern Ireland.

“While the court made no formal declaration, a majority of judges stated their view that the laws of abortion in Northern Ireland are incompatible with article 8 of the European Convention on Human Rights - the right to respect for private and family in cases of fatal foetal abnormality, rape and incest.

“This is clearly a complex area of law, an extremely sensitive subject matter which raises a number of different issues to consider.”

Ms Bradley said she is continuing to talk with parties in Northern Ireland, adding her “urgent priority” is to re-establish devolved government so decisions can be taken there. Additional reporting: PA