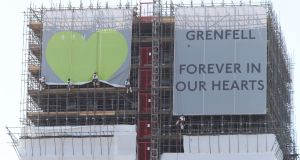 Banners are unveiled on the outside of Grenfell Tower in west London on Wednesday. Photograph: Yui Mok/PA Wire

The combination of circumstances that led to the Grenfell Tower tragedy “do not appear to be present in Ireland” – but there is a need to strengthen the State’s fire regulations, according to a major fire safety review.

The review of the Fire Safety Task Force, conducted with the help of international experts, found key differences between the UK and the Republic, notably in evacuation strategy of high-rise buildings – including an absence in the Republic of the controversial “stay put” policy for residents.

The report also found more extensive use of fire alarms that provide early warnings of fire and facilitate evacuation of buildings than in the UK.

The report was commissioned by Minister for Housing Eoghan Murphy after the Grenfell Tower fire in June 2017 and it outlines some shortcomings in fire prevention, protection of buildings and enforcement of regulations in spite of Ireland having a low rate of fire deaths based on international comparisons.

It also warns of the need to pay particular attention to the risks associated with poor-quality, high-density buildings (with above average numbers of residents) in urban areas.

The report’s recommendations were approved by the Cabinet on Wednesday.

A national survey of medium to high-rise buildings greater than six stories, or 18m, high led to an evaluation of 842 buildings throughout the State.

It found 20 required “substantial work”, such as removal of cladding on their exterior, but there was no instance where the controversial combustible cladding material that contributed to the spread of the Grenfell fire was discovered.

A total of 291 were identified as having specific external cladding systems (104 residential and 187 non-residential). In 226 cases, building owners were required by local authorities using powers under the Fire Services Act to assess fire safety in these specific buildings in more detail.

Fire safety in certain categories of buildings providing sleeping accommodation is “in need of most urgent attention from a life safety perspective”, taskforce chairman Seán Hogan said in a memo to the Minister.

“Lower-end accommodation” tended not to have alarm systems or obvious escape routes in the event of fire, said Mr Hogan.

On the recent fire at the high-rise Metro Hotel in Ballymun, he said the taskforce had “no particular concerns”.

While Ireland had a low rate of fire deaths, Mr Hogan added: “We should not be complacent – each fire death is one too many –and there is an ever-present potential for some fires to escalate in particular circumstances and to cause multiple fatalities. Unfortunately, after a 40-year record low of 20 fire deaths in 2016, the provisional figures for 2017 indicate a steep increase.”

Brian Sweeney, a former chief fire officer for Strathclyde Fire & Rescue in Scotland Brian Sweeney, who was a taskforce member, said he was confident in commending Ireland’s approach to fire safety, including its approach to evacuating buildings which been in place for 20 years.

“Ireland in the main is a fire-safe nation,” he added.

There would be lessons emerging from the Grenfell fire inquiry that would have to be taken on board, but he agreed with the Government’s approach of evaluating what it could do in the meantime.