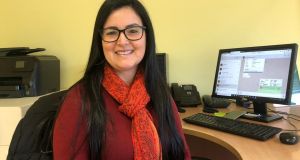 Brazilians living in Gort, Co Galway, are fearful about the rate of Covid-19 infection, within their own community and more generally, but accept that further restrictions on travel from abroad are needed.

“It’s not so good, but it is necessary,” says Giselle Costa, who works at Real Transfer, a money-forwarding agency that helps members of the town’s Brazilian and other communities to send money back home, of the latest measures.

“I don’t like much the idea that Brazilians [coming to Ireland have to] stay in a hotel and pay,” she says of the proposed compulsory quarantine. “To stay in home for 14 days is okay.”

Restrictions aimed at stopping the spread of virus variants from the UK, South Africa and Brazil were announced by the Government last week.

Passengers from these countries are to be subject to a mandatory 14-day self-isolation period on arrival. For those coming from Brazil and South Africa, however, this is to be replaced by compulsory isolation in designated hotels, with the resultant bill being paid by the individual forced to quarantine.

People entering the State will also have to show a negative PCR Covid-19 test that is less that 72 hours old.

Gort is home to some 2,500 Brazilians, attracted since the 1990s to work in a now-closed meat factory. Many now work in other fields such as construction, care roles, cleaning, retail and hairdressing.

Isaias Silva, a translator, estimates that the rate of Covid-19 infection among Brazilians in the area has been as high as 30 per cent.

“Most of them are good already,” he says of their recovery, “but six or seven went to ICU in Galway.”

He says that many are returning to Brazil because work has dried up as the State moves in and out of lockdowns, and because some are undocumented and have no PPS number. This means they are unable to claim the pandemic unemployment payment and have no income.

“Most of them are in a very bad situation,” he says of the undocumented people, “and many are going back home.”

Some seek help with the return airfare from the International Organisation for Migration. However, family ties continue also to bring people to Ireland, but enhanced restrictions and the costs involved are a real barrier.

“People are very afraid,” says Mr Silva. “I know of a woman who has just had a baby, and this lady needs her mother [with her in Ireland] and she is coming with her aunt.

“It makes the trip very expensive [if they have to quarantine in a hotel], and they also have the fear of being refused entry because there would be new regulations in place.”

Fellow translator Lucimeire Trindade says the Covid-19 restrictions have been particularly hard on Brazilian women who do not have official permission to be in Ireland and work.

Restrictions barring most from travelling more than 5km from where they live, and from entering other people’s homes, have made life unusually hard for Brazilian women, many of whom work as cleaners.

Gort’s Brazilians are tight knit and tend to rely on each other, in the first instance, when hardship calls. Community fundraising has helped pay for food hampers and, medicine, and contributes to paying rent for those in need.

“Brazilians are the kind of people who love to get together,” says Ms Trindade, “but now there’s a lot of depression and worry about money.”

Fernando Castro runs an internet cafe on Gort’s Market Square that is something of a haven for the Brazilian community. His one employee, a woman, tested positive, so for now he’s running the operation alone.

“She’ll probably be back [in February] when she brings a negative result,” he says.

He knows many Brazilians who have gone home and not returned.

“I know many guys who went back at Christmas and now this month, too, because they feel more safe in their homeland.”

However, Mr Castro is determined to stay in Ireland.

“I like it here,” he says, “I have a son here. It’s a good place to live. It’s safe and people are respectful. But the weather’s not so nice.”

He says the community will accept the new travel restrictions.

“Nobody likes it but we have to respect the Government’s decision,” he says.

But for many of Gort’s Brazilians, Ms Trindade’s summation of the pandemic will probably ring truest.

“It’s been tough but when you’re a migrant, it’s really tough,” she says.