Surfer rescued after getting into difficulty off west Cork coast 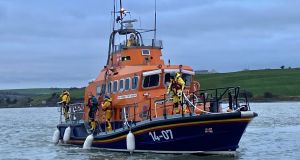 A surfer was rescued on Saturday afternoon after getting into difficulty off the west Cork coast.

The young man was in difficulty for almost 45 minutes about 1km offshore at Garrylucas Beach near the Old Head of Kinsale shortly after 4pm.

“They proceeded at full speed to the area where the casualty was and they arrived there within 15 minutes – there was a rough sea and the casualty was being blown out to sea,” said Mr O’Dwyer.

He said the crew “plucked him from the choppy seas”, assessed him , wrapped him in a blanket and brought him to the RNLI station house.

“He was really glad to be safely on shore and appreciated some hot drinks from Station Crewman Micheal Hurley, after a difficult 45 minutes in the cold, rough water,” said Mr O’Dwyer.

“The conditions at sea were difficult with offshore winds having risen in the afternoon and a rough sea developing but thankfully we had a happy ending and the young man’s mother drove to the stationhouse to collect him.”

Mr O’Dwyer urged anyone visiting coastal areas during the current Covid-19 lockdown to follow usual safety procedures. He said that anyone going to the beach, if it is within their 5km Covid-19 limit, should adhere to safety advice to prevent a tragedy from occurring.

“As we experience severe lockdown times once again until March 5th, we would stress to all those partaking in any water activities or planning a visit to the coast over the next six weeks, to remember and follow safety advice.

“Have a plan – check the weather forecast, tide times and read local hazard signage and if you are with your family, keep a close eye on them in the beach and in the water and don’t allow any member of your family to swim alone.”

Mr O’Dwyer also urged people to never use inflatables on the sea and he advised anyone who falls unexpectedly into the sea to fight their instinct to thrash about but instead lean back, extend their arms and legs, and float.