Pensioner declared dead: ‘I am laughing about it now but it wasn’t funny then’

Department of Social Protection ‘has sincerely apologised for this error’ 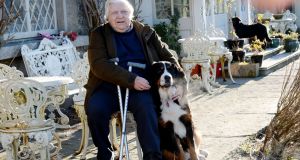 Mike Mahon, from Laragh, Co Wicklow, with his dog Milly: The retired airline pilot’s State pension was stopped for five months when he was classified as dead. Photograph: Alan Betson

While Mike Mahon can laugh now at how the Department of Social Protection mismanaged his pension over a period of six months, and wrongly assumed he had died not once but twice, he was not laughing at the time.

The retired airline pilot first had his State pension stopped for five months between May and September because civil servants working between the HSE and Department of Social Protection incorrectly classified him as dead, despite the fact that he was released alive and well from a nursing home after recovering from a broken hip.

After he assured them he was in the land of the living, his State pension was returned to his account. But there was worse to come.

On December 12th, Mr Mahon noticed that more than €7,300 had disappeared from his bank account.

With no idea where it had gone, he was terrified he had been the victim of fraud. When he contacted his bank, its weekend staff were unable to shed any light on who had taken his money, or why, and he was left hanging for 48 hours.

When his bank branch opened he was told the Department of Social Protection had improperly withdrawn the money from his account because someone, or some system, was operating on the basis that he was dead.

“I got a hell of a fright and it was Saturday so the bank said they couldn’t do anything until the Monday. I didn’t know where the money had gone and I thought it was a scam. I am laughing about it now but it wasn’t funny then.”

Stressing the seriousness of the situation, he points out that while he is “compos mentis, a person with dementia may not have noticed anything and could have lost their money”.

He expresses surprise that a Government department can “access your bank account and withdraw money without permission”.

The Irish Times contacted the department and asked why Mr Mahon’s pension was stopped in May without any apparent attempt made to establish if he had in fact died and why more than €7,300 was subsequently withdrawn from his account in December without any notification.

In a statement, the department said it “regularly receives written notification” from bodies such as the HSE alerting it to a change in circumstances “that affects the social welfare payment being made to customers across a range of schemes and it makes the necessary changes”.

The statement said that “unfortunately, there was an isolated incident last year where such information was provided which resulted in a social welfare payment being stopped and deductions made from the bank account in which the payments were lodged [as provided for under Section 340 of the Social Welfare (Consolidation) Act 2005] on the basis that an over-issue had occurred”.

It added that when Mr Mahon contacted the department, payment resumed, but “the request to withdraw an amount of money from [his] bank account inadvertently remained active and, subsequently, the deduction from the bank account was made”.

The statement went on to say that when the department was contacted a second time by Mr Mahon it “immediately refunded the payment that was incorrectly deducted. The department has sincerely apologised to the customer for this error and is very sorry for the upset that this incident has caused and has taken steps to ensure that such an incident will not happen again.”

It concluded by saying the department had “revised the processes that it puts in place when it receives such information from another authority and, as a result, it now has structures in place to ensure that it is satisfied with the veracity of such information before making any adjustments to payments. We have also contacted the HSE regarding the transfer of incorrect information. The department again regrets that such an incident occurred.”