Average of 2.1 rooms per person in Irish dwellings compared with EU average of 1.6 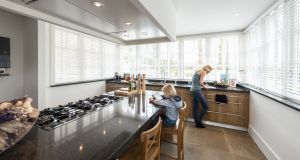 Official statistics revealed that 69.6 per cent of Irish people were living in dwellings deemed too large for their needs in 2019 in terms of excess rooms. File photograph: iStock

Almost seven in 10 people in Ireland are living in homes that are too large for their household needs.

New figures published by the European Commission show that Ireland has one of the highest rates of people living in under-occupied dwellings in the EU.

The official statistics, released by Eurostat, revealed that 69.6 per cent of Irish people were living in dwellings deemed too large for their needs in 2019 in terms of excess rooms and more specifically bedrooms. This was more than twice the EU average of 32.7 per cent.

Only Malta and Cyprus had higher rates of under-occupied homes than Ireland.

“The classic cause of under-occupation is older individuals or couples remaining in their home after their children have grown up and left, while family breakdown can also result in under-occupation,” a Eurostat spokesperson said.

On average there are 2.1 rooms per person in Irish households compared with the EU average of 1.6 rooms.

The Republic’s high rate is believed to be linked to the large number of adults living in “empty nest” households, as well as the relatively larger size of traditional Irish families and associated need for more bedrooms compared with most other European countries.

The figures show that more than 92 per cent of older people in Ireland are living in homes considered too big for their needs.

Meanwhile, 3.2 per cent of the Irish population were classified as living in overcrowded households in 2019, which increased from 2.7 per cent the previous year.

It is still the second-lowest rate among the EU’s 27 member states, where 17.2 per cent of people on average live in households without enough rooms for their needs.

Irish men (3.5 per cent) are also more likely than Irish women (3.0 per cent) to live in overcrowded households.

Based on age, 20-25-year-olds are most likely to be living in an overcrowded dwelling with the problem affecting 5.8 per cent of that age group compared with just 0.3 per cent of those aged over 65.

Overcrowded accommodation is considered to be any dwelling that does not have the number of rooms appropriate to the size of the household, the family situation and the ages of its members.

On measures of housing quality, Irish homes were slightly better than the EU average, with 12.5 per cent of Irish people living in a house with a leaking roof and 4.9 per cent unable to keep their home adequately warm.