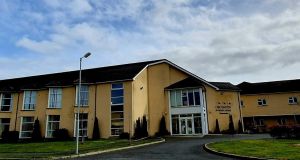 A nursing home group that has recorded six Covid-19 deaths in one of its homes has called on the Government to roll out Covid-19 vaccines in care homes 24 hours a day, seven days a week.

Five residents at Droimnín Nursing Home in Stradbally, Co Laois, have died in less than a week, bringing fatalities from the disease to six since the outbreak started on December 31st.

A further 52 residents out of 65 at the privately-run nursing home are infected, though about 40 of them are showing no symptoms and are well. A total of 33 staff are out sick or self-isolating.

Gearoid Brennan, chief executive of Brookhaven, the owner of the Co Laois home, said Covid-19 vaccines had to be rolled out more quickly to keep the virus out of other nursing homes.

“It can’t move fast enough. We need it moving 24 hours, seven days a week to get people vaccinated and not have them in the position we were in where we were 19 days away from Droimnín’s vaccines and suddenly we have a major outbreak,” he said. “Let’s stop it happening now in any other nursing home as soon as possible.”

The rollout of vaccines at Droimnín, planned for January 19th, has been postponed because of the outbreak.

The Government has already accelerated the nursing home vaccination programme so that all 75,000 residents and staff will have their first dose of the Pfizer-BioNTech vaccine by January 24th. Record levels of infections recorded since Christmas and rising outbreaks in nursing homes have increased the pressure on the planned programme.

There are more than 100 Covid-19 outbreaks in the 582 nursing homes cross the State and there are 880 staff out of work in 80 of the nursing homes of most concern to the HSE.

It emerged on Monday that the severe third wave means outbreaks and staff shortages may make visits to nursing homes impossible, even in compassionate cases when a resident is dying.

Nursing homes will “need to limit such critical and compassionate visiting to times when visiting can be effectively supported by available staff,” the Health Protection Surveillance Centre said in new guidelines issued on Monday.

“Such visiting is subject to a risk assessment in each case,” it said.

Two other Brookhaven nursing homes, Abbeybreaffy in Co Mayo and An Teaghlach Uilinn in Moycullen, Go Galway, will receive their vaccines later this week.

Mr Brennan said he hoped the two other homes in the group, Brookhaven in Ballyragget, Co Kilkenny, and Talbot Lodge in Malahide, Co Dublin, would receive their vaccines next week.

The nursing home group is recruiting replacement and additional staff to manage the outbreak at Droimnín Nursing Home but Mr Brennan said that many homes struggling to manage outbreaks of the virus were “fishing out of the same pond for resources”.

“We are in the throes of it all. We are working around the clock to the respond to the situation,” he said.

The HSE is increasing the frequency of serial testing of nursing home staff from fortnightly to weekly to prevent other care facilities experiencing outbreaks but its chief operations officer Anne O’Connor told Newstalk radio on Monday that the testing was not mandatory.

Mr Brennan said the increased testing was “an early warning sign” and gave nursing homes a “state of the nation” on residents and staff and allows them to take action and isolate people.

“It is essential if we are to stop the spread of this virus in nursing homes,” he said.