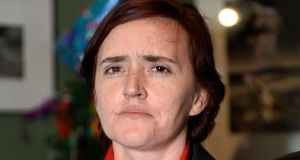 There is “still time” for Ireland, a former Ukip London Assembly candidate told members of a right-wing political party in Dublin on Wednesday.

Speaking at an Identity Ireland press conference in Dublin, Anne Marie Waters – a leading member of Pegida UK and director of Sharia Watch – emphasised her support for the nationalist group.

“I know what it’s like to defy the prevailing view. I’m fortunate that in Britain there are more like me,” she told the small audience. “But none of this is controversial. There’s nothing nasty about it. Of course, a nation should put its own citizens first.”

Earlier in her career, Ms. Waters made two separate attempts to be selected as a Labour candidate before joining Ukip. She was chosen by the party’s selection panel to stand in this year’s London Assembly elections, but was dropped when her role within Pegida – a controversial anti-Islam movement which was founded in Dresden, Germany in 2014 – became public. She still remains a member.

Ms Waters was joined on-stage in Dublin by Identity Ireland chairman Peter O’Loughlin in a conference that reiterated the organisation’s stance on immigration, border controls and radical Islam. The event was originally intended as a debate, with several political opponents invited to attend. None of them responded.

“We find it hard to get coverage because of what we do,” Mr O’Loughlin said, before claiming that those who disagreed with Identity Ireland’s views were “afraid” of engaging in dialogue. “We are fairly confident we could beat these guys in a heads-up debate”.

When asked why she was joining forces with Identity Ireland, Ms Waters argued that “Ireland is not in the same mess as the rest of Europe”, whilst describing the EU as an organisation enforcing “totalitarianism and tyranny” at the expense of “national identity”.

“There’s still time for Ireland. I would say a similar thing to the Portuguese, as well” she declared, before warning the audience that “tens of thousands of immigrants” would be on their way as a result of Ireland’s EU membership.

According to Ms Waters, they should “follow Britain’s lead”, referring to recent Brexit referendum.