Short documentary chronicling the process and completion of the landmark Belfast Agreement. Video: The Detail 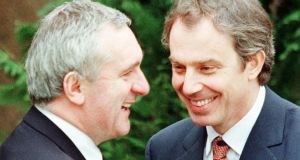 Bertie Ahern and Tony Blair after agreement was reached on the Belfast Agreement on Good Friday, April 10th, 1998. Photograph: Reuters

All the many accounts of the Belfast Agreement, signed 20 years ago, attest to the extraordinarily close and productive working relationship that quickly grew up between the then taoiseach Bertie Ahern and the British prime minister Tony Blair after both men were elected in 1997.

In Ahern’s memoir he recalls that he spoke to Blair “several times a week for the whole time he was prime minister”.

In Blair’s autobiography he recalls his first meeting with Ahern, and says “we got on immediately like the proverbial house on fire”.

Both men are probably overstating things a bit.

In his diaries (written, unlike the accounts above, at the time) Alastair Campbell recalls the first meeting between Ahern and Blair in 1997, and says that Blair’s assessment was that Ahern was “basically putting the Sinn Féin line most of the time”.

But there is no doubt that the two men were to form a personal and political bond without which the Belfast Agreement would not have been possible.

But it was not just the two men. There was an unprecedented degree of closeness and commonality between officials from both governments which mirrored – and paved the way for – the co-operation between the political principals.

“It’s not just the personal chemistry between the two,” says Martin Mansergh, the former diplomat and adviser on Northern Ireland to Ahern who was a key figure in the Northern talks for a long period. “The biggest thing is there was a sense of a joint project between the two governments.”

Detail of the agreement

Mansergh says this included not just the politicians but the officials and advisers on both sides. The political leaders were instrumental in closing the deal, and persuading the Northern parties to sign up. But the detail of the agreement was all worked out in painstaking detail by officials over a long period beforehand.

This account is borne out by another senior official who worked on the agreement.

“We spent an awful lot of time with each other,” he says of relationships between the civil servants and advisers on both sides. There were differences and tensions, “but there was a shared goal”.

The official also says that the Irish and British governments co-operated significantly on European matters as well, where they often found themselves on the same side of arguments.

Sources familiar with the current relationship between the two governments all attest that the relationship has suffered badly in recent years, and one person closely involved with Anglo-Irish relations in recent decades reckons that relations are now frostier than at any time since the 1980s.

This is firstly true at the level of the political principals. Blair and Ahern were extremely close. David Cameron and Enda Kenny also nurtured a close relationship, institutionalising the Dublin-London axis with an annual summit, regular meetings of senior officials and culminating in the visits of Queen Elizabeth to Ireland and President Michael D Higgins to the UK.

But that relationship has decayed. The annual summits have fallen into abeyance. Senior officials in both governments acknowledge the lack of chemistry between Theresa May and Leo Varadkar, a factor which is the source of much understatement but is a significant factor.

Senior officials no longer have long meetings about the North which finish with a decent lunch. The North has slipped down the priority list in Dublin; it has disappeared off it completely in London.

But above all, perhaps, the two governments find themselves on different sides of the most divisive issue since the IRA campaign – Brexit.

“The relationship is now 100 per cent about Brexit,” says one senior source.

“There’s quite a lot of mutual suspicion, I’m afraid,” says one figure in Dublin. “It’s Brexit. It’s just strained everything.”