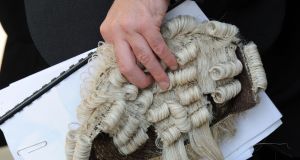 Judge Patricia Smyth refused to hear an application by a solicitor acting for The Irish Times and others seeking the lifting of the restrictions. Photograph: Frank Miller

Following the not guilty verdicts in the rape trial of Paddy Jackson and Stuart Olding, several media organisations applied for permission to report on the legal argument which took place in the absence of the jury.

Ordinarily, both in the North and South, reporting restrictions on legal argument fall away once a trial is completed as the jury can no longer be prejudiced. But in this case, Judge Patricia Smyth ordered the restrictions remain in place until further notice.

She refused to hear an application by a solicitor acting for The Irish Times and others seeking the lifting of the restrictions, and put the matter into April 25th, next for a full hearing.

Judge Smyth did agree to lift a restriction on the reporting of the fact that Mr Olding was granted legal aid about half-way through the trial.

The judge also lifted an order issued on Tuesday forbidding any reporting of “any public gathering, demonstration, public event, rally or march which may be held in connection to this trial.”

It is understood this was in relation to planned public demonstrations in support of the complainant in the case. The demonstrations took place in Belfast, Dublin and Cork and elsewhere on Thursday.