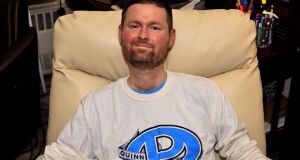 Pat Quinn, co-founder of the viral ice bucket video challenge, has died at the age of 37 after a seven-year battle with amyotrophic lateral sclerosis (ALS). Photograph via Twitter

An American man who helped found the Ice Bucket Challenge “put motor neurone disease on the map”, the Irish association for the disease has said, following his death.

The Ice Bucket Challenge was a social media campaign in which people around the world posted videos and photos of themselves dumping buckets of ice water on their heads and challenging others to do the same while urging donations for motor neurone disease research.

The challenge went viral in 2014, and generated more than more than €186 million globally for medical research into amyotrophic lateral sclerosis (ALS). In Ireland, some €1.7 million was raised through the campaign.

Patrick Quinn, a co-founder of the challenge, died this weekend aged 37. From New York state, he was diagnosed with ALS, also known as Lou Gehrig’s disease, in 2013.

“It is with great sadness that we must share the passing of Patrick early this morning,” his team wrote in a post in Mr Quinn’s ALS advocacy Facebook group. “We will always remember him for his inspiration and courage in his tireless fight against ALS.”

Maeve Leahy, from the Irish Motor Neurone Disease Association, said the challenge, started by Peter Frates and then taken on by Mr Quinn, had funded research breakthroughs for the disease.

“We are forever grateful for their courage and inspiration because they changed the course of history for this disease,” Ms Leahy said.

“Thanks to them this underfunded disease got its day in the limelight and we are still seeing the fruits of their labour. I think it’s the most successful viral challenge ever.”

From the funding generated in Ireland, the association funded an additional nurse to assist those with the condition, purchased equipment, while €600,000 was also put towards research into the disease.

“Through the funds raised right across Europe, they were actually able to identify a new gene. It was called NEK1. The money raised really went towards funding a breakthrough.”

Around 110 people are diagnosed in Ireland with motor neurone disease every year. The condition known as the 1,000 day disease, a reference to the average time between diagnosis and death.

Half a million people across Ireland took part in the challenge to raise funds for the association, including a number of high-profile people such as Dáithí Ó’Sé on the Rose of Tralee.