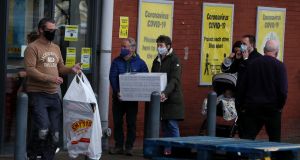 People queue outside a Smyths Toys shop in Belfast as frustration has been expressed over the announcement that non-essential retail, pubs and restaurants must close for two weeks from November 27th under the latest plan to stem the spread of coronavirus. Photograph: Brian Lawless/PA Wire

The North’s minister for finance Conor Murphy has announced a £300 million Covid-19 support package that includes a £200 voucher for every household in Northern Ireland to be spent in local shops.

The funding announcement was made on a day when it appeared that the recently concluded four-week lockdown was having an effect on the coronavirus figures in the North.

Mr Murphy said that the funding involves more than £200 million for businesses and £98 million to assist the most vulnerable.

“This includes £95 million for a high street voucher scheme for a pre-paid card for use on the high street,” the Mr Murphy told Northern Assembly members on Monday afternoon.

Mr Murphy said that it would be up to the Department for the Economy to administer the voucher scheme but it was expected that each household in the North would receive a £200 voucher.

He explained however that this scheme was not likely to come on stream until the new year and was designed to support businesses during the “leanest” months.

The new allocation was agreed at a meeting of the Northern Executive on Monday. The Minister said the funding came from a £400 million allocation from the British treasury two weeks ago.

It also comes ahead of a new two-week pre-Christmas lockdown that begins on Friday and will see the shutdown of non-essential retail businesses.

Wet pubs – those that don’t serve food – will receive £10.6 million. This will assist about 1,000 licensed premises, said Mr Murphy.

Mr Murphy allocated £55 million to extend a support scheme for sectors that were forced to close such as non-essential retail, leisure and entertainment businesses.

He is also providing £20 million for company directors, a group that was excluded from previous support.

Mr Murphy also said he plans to hold an additional £150 million in reserve to extend the current business rates relief scheme. He told MLAs, “In addition to this £213 million for business, and recognising Covid will continue to be with us for the months to come, the Executive has also agreed to hold £150 million centrally for longer-term support on business rates.”

The new funding also will mean £4.1 million for bed and breakfasts which previously missed out on business support because they pay domestic rates.

Mr Murphy further announced £98 million to support education, councils, sport and to protect the vulnerable. He said that “£44.3 million is being provided to fund a one-off £200 heating payment for those with disabilities who are on higher disability benefits and older people in receipt of pension credit”.

He said £26.4 million was being allocated to support schools. This included funding to “ensure families of young people who are entitled to free school meals will receive food grants during school holidays”.

On Monday three more deaths were recorded taking the death toll in Northern Ireland to 936. There were 280 new cases bringing the total to 50,064 since the start of the pandemic.

While the deaths and incidence rate has reduced it is clear from the figures that there is still great pressure on hospitals. Bed occupancy is at 95 per cent while there are 438 patients receiving Covid treatment in Northern Ireland hospitals. Of these 37 are in intensive care units with 30 on ventilators.

Meanwhile, the PSNI said that all operational police officers in Northern Ireland are to be issued with spit and bite guards for the duration of the pandemic.

Anyone receiving them must complete mandatory online training. Officers must activate body-worn video and every use must be notified to the Police Ombudsman for Northern Ireland.

Amnesty Northern Ireland’s director Patrick Corrigan criticised the use of spit guards, saying that “placing a hood over someone’s head is a significant use of force and one that raises key concerns over cruel and degrading treatment, as well as serious potential health risks”.

Earlier on Monday, the North’s minister for health Robin Swann made a “heartfelt plea for unity” in the Northern Ireland Assembly ahead of tough new coronavirus restrictions coming into force on Friday.

“The public are watching and are looking to us for united leadership,” he told MLAs on Monday.

Mr Swann said while it is the duty of the chamber to hold the Executive to account and scrutinise policy decisions, he urged against a descent into “political point-scoring”.

“The last few weeks have not seen devolution at its best. That is something of an understatement,” he said.

“Frustration and anger are widespread. We could spend hours in this chamber raking over the decisions that were made and not made.

“I have made my own views known inside and outside the Executive.

“Nevertheless, I fail to see where another bout of division and recrimination will get us now.” – Additional reporting PA