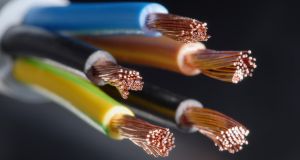 The interconnector will allow 700MW of electricity to flow between the countries, enough to power about 450,000 homes. Photograph: iStock

A site near Carrigtwohill in east Co Cork has been selected by EirGrid as the place to build a converter station for the proposed Ireland-France Celtic Interconnector.

The converter station at Ballyadam will be a key component of the almost €1 billion project to link the Irish and French electricity grids.

The interconnector will allow 700MW of electricity to flow between the countries, enough to power about 450,000 homes. The project will also include a fibre optic link for high speed telecommunications.

EirGrid, the operator of Ireland’s electricty grid, is expected to announce on Monday that the Ballyadam site completes the public consultation and selection process for the interconnector’s land route in the State.

The interconnector will link Pontusval in Brittany with Claycastle beach, which is south of Youghal. From Calycastle, it will follow the N25 Wexford to Cork road, passing via Killeagh and Castlemartyr, before veering north at Midleton to Ballyadam, a distance of about 34km.

The Ballyadam site is on land owned by the IDA and is situated between the N25 and the the Cork to Midleton rail line. It had previously been reserved for US pharmaceutical giant Amgen, which abandoned plans to move there in 2010.

The station will convert direct current electricity from the interconnector into alternating current electricity, which will be fed into the national grid at a substation at Knockraha, some 10km from Ballyadam. All 44km of cables are to be laid underground.

East Cork TD David Stanton said he was satisfied with the proposal and that a significant fund would be set up to deliver a “community benefit” to the towns along the route.

However, he said he was still hoping it would bypass the towns of Killeagh and Castlemartyr, rather than digging up roads and footpaths that had recently been laid.

The Celtic Interconnector will provide a link for Ireland’s grid to the EU networks after Britain’s exit from the EU is completed.

When operational in 2026, it is hoped the connection will help bring cheaper domestic electricity prices, given rates are lower in France. It is also hoped that Ireland will be able to use the interconnector to export renewable energy that the State is unable to store.

Mark Foley, EirGrid’s chief executive, said more than 1,000 responses were received to the most recent public consultation on the project.