Man due in court over robbery of wheelchair user in Cork 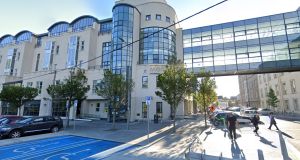 A 39-year-old man is due to appear in court in Cork on Friday charged in connection with a robbery during which a 50-year-old amputee was pulled from his wheelchair and left lying on the street.

The robbery happened after the wheelchair user had attended the Mercy University Hospital for a medical appointment on Monday afternoon and was resting in his wheelchair at nearby Gravel Lane.

The wheelchair user was approached by a man who demanded money and when he went to get some coins from his wallet to give to the man, the man made a sudden grab for his wallet.

A struggle ensued and the wheelchair user was pulled from his wheelchair and left lying on the ground as the thief made off on foot with the man’s wallet and about €100 in cash.

A passing taxi driver heard the man’s cries for help and he and several members of the public helped him back into his wheelchair before alerting gardaí who were quickly on the scene.

Gardaí carried out a search of the area but did not find the man. Gardaí identified the man, who was known to them, through CCTV footage taken from the area.

A team of gardaí from Cork city travelled to Mallow on Thursday morning backed up by members of the Armed Support Unit. The 39-year-old man, originally from West Cork, was arrested in the town.

The man was brought to the Bridewell Garda station where he was detained under Section 4 of the Criminal Justice Act for questioning about the robbery on Monday.

Gardaí have since received directions from the Director of Public Prosecutions to charge the man with robbery from the wheelchair user and he is due to appear at Cork District Court later on Friday morning.