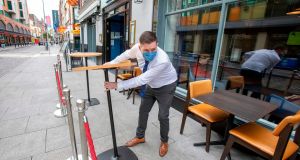 An employee sets out tables for customers outside of a pub in Dublin on Friday. Photograph: Paul Faith/AFP

Tighter coronavirus restrictions and a ban on indoor dining in Dublin will lead to an “economic meltdown” for the restaurant and hospitality sector, the Restaurants Association of Ireland (RAI) has said.

The Government has put Dublin on Level 3 of its five-scale suite of restrictions, in an effort to combat concerning increases in Covid-19 cases in the capital.

On Friday, 253 more cases of coronavirus and three further deaths were confirmed by the National Public Health Emergency Team (NPHET). Of these cases 116 are in Dublin.

The Cabinet on Friday approved further recommendations from NPHET to only permit Dublin restaurants and pubs that serve food to open outdoor dining spaces, or for takeaway services. Outdoor dining is to be limited to a maximum of 15 people.

The measures come into force at midnight on Friday and remain in place for at least three weeks.

Announcing the restrictions, Taoiseach Micheál Martin said the decision to prohibit indoor dining was taken to limit the number of places where people congregate.

While rising cases were linked to outbreaks in private homes, “the initial infection is taking place outside the home and in the community,” he said.

The decision was “not any reflection on business owners that have done everything that was asked of them,” he said.

Chief executive of the RAI Adrian Cummins said the ban on indoor dining in Dublin would leave 50,000 jobs “on the line this weekend.”

“Today’s announcement by Government will cause an economic meltdown for the restaurants and hospitality sector in Dublin,” he said.

Restaurants have been open since late June and had implemented all required public health guidelines, such as distancing between tables and hygiene measures, Mr Cummins said. This had protected staff and customers, “while sustaining their business and reacting to the ongoing economic turbulence,” he said.

Since the Government launched its five-level Living with Covid-19 plan earlier this week there had been “absolutely no engagement” with the sector, he said.

The restaurant lobby group was seeking an emergency meeting with Mr Martin and Tánaiste and Minister for Enterprise, Trade and Employment Leo Varadkar, he said.

“The anger and frustration is palpable across our industry at present and as the representative body for a sector that is first, worst, and continues to be hit most by Covid-19, we need constructive daily dialogue with Government going forward to ensure we exit this lockdown as quickly as possible,” Mr Cummins said.

“Public health is and will always be the number one focus. The economy must be a key focus also, businesses are on a cliff edge and this imposed lockdown will close many permanently,” he said.

The Licensed Vintners Association (LVA), who represent pubs in Dublin, said the new restrictions amounted to the Government “ceding control of the country to NPHET.”

Donall O’Keeffe, chief executive of the LVA, said “it is quite clear now that the Government has little say in how this country is being run and we are now being ruled by NPHET.”

“They are closing down swathes of businesses in Dublin, pushing thousands of people out of work and yet NPHET admits they don’t have any data to show where the infections are arising in Ireland,” he said.

“Despite that lack of data the Government has empowered them to inflict whatever guidelines they want without challenge,” Mr O’Keeffe said.

The Government had imposed the “most severe, draconian and punishing restrictions on the hospitality sector in all of Europe,” he said.

Patricia Callan, director of Drinks Ireland, who represent alcoholic drink suppliers, said “the Government must stop unfairly targeting an entire industry that is already on its knees, treating the sector as a political scapegoat.”

The drinks’ manufacturer group said the decision on indoor dining and refusal to allow drink-only pubs reopen would be the “final blow” for many businesses already struggling to stay afloat.