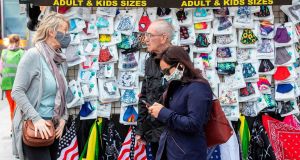 Signs advertise face masks for sale on a street stall in Dublin on Friday. Photograph: Photo by Paul Faith/AFP

There have been 253 more cases of coronavirus and three further deaths confirmed, according to the National Public Health Emergency Team (NPHET). Of these cases 116 are in Dublin.

Of the 253 cases, 143 are men and 108 are women while 71 per cent are under 45 years of age. Forty-five per cent are confirmed to be associated with outbreaks or are close contacts of a confirmed case.

Sixty-one of the cases have been identified as community transmission.

Of today’s cases, 116 are in Dublin, 22 in Kildare, 14 in Cork, 14 in Galway, 13 in Donegal, 10 in Limerick, 10 in Louth, nine in Mayo, eight in Waterford, seven in Wicklow and the remaining 30 cases are located in Carlow, Cavan, Clare, Kilkenny, Laois, Longford, Meath, Monaghan, Offaly, Tipperary, and Westmeath.

Taoiseach Micheál Martin has warned that Dublin is at a “very dangerous place” and without action, could return to the worst days of the crisis.

In a live address to the nation, Mr Martin said he knew the havoc the virus was causing to the economy, to sports, to arts and culture.

“I know this, my first and most important obligation is to protect you. This virus kills. It kills old people but it kills young people too,” he said.

He said that the new restrictions for Dublin would leave “many people angry” but it was necessary to protect life. Mr Martin was speaking after the Government decided that from midnight tonight, Dublin city and county would move to Level Three alert for the next three weeks.

A further 163 new confirmed cases of Covid-19 were reported in Northern Ireland in the last 24-hour reporting period, bringing the total number of cases in the region to 8,943, including 763 in the last seven days. The Department of Health announced two further deaths with Covid-19 in Northern Ireland, bringing the total toll in the region to 575.

An SDLP MLA has confirmed he will self-isolate after testing positive for Covid-19. West Tyrone representative Daniel McCrossan has closed his office to the public as a precaution. He received a positive test result on Friday, after testing negative for the virus earlier in the week.

“Early on Monday I was made aware that I had been in contact with someone who was demonstrating symptoms of Covid-19. I immediately booked a test and informed my colleagues that I would not be able to attend plenary sessions in the Assembly this week as a result,” he said. “Late on Tuesday I received a negative test result. This was a huge relief, but unfortunately at that time a member of my household received a positive test result and, in line with the public health guidelines, I have remained in isolation at home.

“Late on Wednesday I began experiencing symptoms of the virus — headache, fever and a new cough. I booked another test for Thursday and received the positive result today.”

Mr McCrossan said his priority is to keep those around him safe.

“This virus spreads so easily, the member of my household and others who were tested had no symptoms at first. It’s a frightening reality. “This virus is still very much with us and I would urge everyone to please follow the public health guidelines, to maintain social distancing, continuing washing hands and to get tested if you show any symptoms at all. “This is the only way we can keep infection rates low and protect the vulnerable and elderly.” Mr McCrossan said he will continue to work in isolation.