Passenger numbers at Dublin Airport down more than 90% 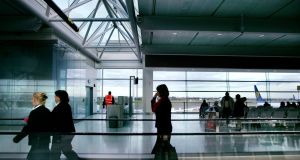 There are 60 flights due to arrive in the airport on Saturday while 63 flights are listed to depart. Photograph: Kate Geraghty/The Irish Times

Human traffic through Dublin Airport has plummeted in recent days and while around 60 flights will fly into and out of the city on Saturday many will be almost completely empty.

Passengers numbers are now down more than 90 per cent compared to the same week last year while the number of flights being handled by the DAA each day are down just under 70 per cent.

It is a trend which is being replicated at airports across Europe according to figures from pan-European aviation organisation Eurocontrol.

All told 29 separate airlines have now suspended all flights to and from the airport for the weeks and months ahead with the vast majority of flights still coming and going now operated by either Ryanair and Aer Lingus.

Most of the airports still being served are in the UK and a handful of cities around the EU.

There are 60 flights due to arrive in the airport on Saturday while 63 flights are listed to depart. Several of those are Aer Lingus flights bound for the US where travel restrictions imposed by the Trump administration mean Irish passport holders will be denied boarding.

The Department of Health retains a significant presence at the airport although the role of its officials remains an advisory one and incoming passengers are not being screened for symptoms of coronavirus or being asked to provide details of their movements once they leave the airport.

“The airport is also open for cargo flight operations which will maintain Ireland’s supply chain and enable the continued import and export of essential products such as medical supplies and pharmaceuticals,” he added.

“So far this week, passenger numbers are down by about 90 per cent compared to the same week last year,” he told The Irish Times.

Passenger flights will continue to be facilitated for as long as they continue to operate, he stressed but services were currently subject to change and cancellation and all passengers flying to or from Dublin Airport are being advised to stay in regular contact with airline for details in relation to their specific flight.

“Dublin Airport’s future passenger operations will be determined by factors such as Ireland’s travel policies in relation to the coronavirus pandemic, the schedules of our airline customers, and the travel policies of the airport’s main overseas markets,” Mr O’Kane said.

“We will continue to keep our runways open during this crisis to ensure Ireland has access to the vital supplies that it needs.”

The airport has been making regular public announcements in relation to social distancing guidelines and there are also floor signs in place to encourage our customers to maintain social distancing in all key areas such as check-in and immigration.

Virtually all the shops and restaurants at the airport are now closed and all the bars have been closed since before St Patrick’s Day in line with official guidelines. Of the 42 food and beverage operations and coffee docks operating at the airport, just eight remain open.

All the retail businesses at the airport have closed and only the Terminal 1 taxi rank is currently operating due to reduced passenger numbers.