Father of three deceased children appeals for letters during isolation 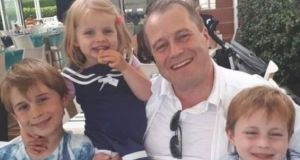 Andrew McGinley with his children Conor (9), Carla (3) and Darragh (7). Photograph: An Garda Síochána 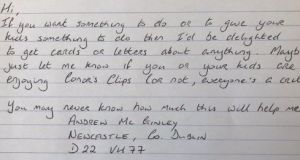 Andrew McGinley, the father of three young children who were found dead at their home in Dublin earlier this year, has appealed to the public to write him letters or postcards during this period of isolation.

The bodies of Conor (9), Darragh (7) and Carla (3) McGinley were discovered in their home at Parson’s Court in Newcastle just before 8pm on Friday, January 24th.

The children’s mother, Deirdre Morley, was found by a taxi-driver in a disorientated condition near the house shortly before the children’s bodies were discovered.

She has since been charged with their murder, but has been unable to attend court due to being unwell.

In a post on Twitter, under an account called Conor’s Clips, set up in memory of his eldest son, Mr McGinley said he was “looking for a favour”.

“I’m struggling with isolation like you all but really missing the company. I was also enjoying most of the letters that I received so I have a request,” he wrote.

“Can you write to me? If you feel like using one of your An Post postcards then great. Letters welcome.”

In the days and weeks following the children’s deaths, Mr McGinley received an outpouring of public support, including many letters and cards from people across the community.

In a handwritten note that was also posted on the website, he continued: “If you want something to do, or to give your kids something to do then I’d be delighted to get cards or letters about anything.

“Maybe just let me know if you and your kids are enjoying Conor’s Clips (or not, everyone’s a critic!).”

He added: “You may never know how much this will help me.”

Since the children’s deaths, Mr McGinley has been posting videos of them on Youtube, which he describes as “his promise” to Conor.

In his eulogy, Mr McGinley said he had “promises that I have to keep and this will drive me on”.

“Conor announced at Christmas that he wanted to set up a You Tube channel. Containing what he never quite committed to but I promised to help him and I will do that for him,” he said at the funeral mass.

Letters to Mr McGinley can be sent to Newcastle Co Dublin D22VH77.