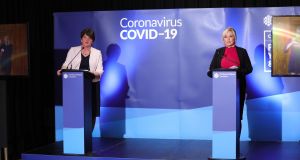 A forum to advise the Northern Executive on how to deal with the coronavirus emergency is to be formed over the weekend, it was announced on Friday amid continuing differences between the DUP and Sinn Féin on how to manage the crisis.

As the coronavirus death toll in the North rose to 13 the DUP First Minister Arlene Foster acknowledged that there was confusion over who should and should not be at work. She said she wanted to bring clarity to the situation.

Ms Foster said at a joint Stormont press conference with Sinn Féin Deputy First Minister Michelle O’Neill that the current public health advice was that those who could not work from home “should continue to go to work as long as there are strict covid safety measures in place”.

She said the plan was to very shortly publish regulations on what companies could and could not continue in operation.

Through Thursday and Friday Ms Foster and Ms O’Neill appeared at odds on the issue of what constituted essential work. On Thursday, in one example, Ms O’Neill said the Ulster Carpets company in Portadown, Co Armagh, should be closed because it was a non-essential operation.

Ulster Carpets, however, said it is observing physical distancing protocols and following the advice of the British government in remaining open.

Ms O’Neill has already called for companies involved in non-essential work to shut down. That should happen “not tomorrow, not next week, but now”, she said.

On Thursday Ms Foster said: “If you are operating a business and you can have safe working practices then you can continue to do that.”

On Friday as a possible means of seeking to resolve these differences and to try to present a united front at a time of crisis Ms Foster announced the new forum.

She said it would be established by the DUP Economy Minister Diane Dodds and would involve businesses, the Public Health Agency, Health and Safety Executive, PSNI, trade unions and local government. The North’s two junior Ministers, Gordon Lyons of the DUP and Declan Kearney of Sinn Féin, also would be on the forum,

“The forum will advise the Executive on the management of our covid response,” said Ms Foster.

And as healthcare workers continue to complain about a shortage of personal protective equipment the Sinn Féin Finance Minister Conor Murphy said a “significant” consignment of such kit has been ordered from China for front-line workers in a joint order with the Irish Government.

The North’s Public Health Agency said on Friday that three more people died in Northern Ireland as a result of the Covid-19 emergency, bringing the total number of the deaths to 13.

The agency added that testing has resulted in 34 new positive cases, bringing the total number of confirmed cases in Northern Ireland to 275.

Meanwhile, dozens of workers from Linden Foods in Dungannon, Co Tyrone, refused to start their shifts on Friday complaining about insufficient physical distancing in the workplace.

Brian Hewitt, Unite’s union regional officer for workers at the meat processing company, said there was a “total absence” of distancing measures on the boning line, in the canteen and at entry and exit points.

Linden Foods said 40 employees had not turned up for work while Unite said the number was 60. Linden Foods said its “utmost priority has always been and continues to be ensuring the health, safety and wellbeing of our employees” and that it had taken measures to deal with workers’ concerns.

It added: “We have doubled the size of our canteens, have erected new multiple handwashing units at the entrance to all our sites, increased sanitising units which are closely monitored, staggered breaks, erected new temporary changing facilities, [are] carrying out temperature checks on all employees twice daily, reviewed social distancing and are installing screens and respacing work areas, increased PPE [personal protective equipment] and undertaken additional training of our teams.”