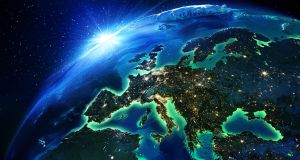 ‘Satellites offer a unique vantage point to monitor the health of our planet.’ File photograph: Getty

The world is in a dark place, gripped by a pandemic that could rage for months and take countless lives. But it has led to an astonishing fall in air pollution in the most heavily populated parts of the planet.

Over the past six weeks, readings from the agency’s Sentinel-5P satellite show nitrogen dioxide (NO2) levels over cities and industrial clusters in Asia and Europe were markedly lower compared to 2019, resulting in less air pollution.

The Copernicus Atmosphere Monitoring Service has found a significant drop in nitrous oxides and fine particulate matter (PM), the air pollutant produced by traffic (especially diesel vehicles) and the burning of wood, peat and coal.

With satellite observations and computer models of the atmosphere, researchers have found a 20 to 30 per cent reduction in surface PM over huge swathes of China.

“Satellites offer a unique vantage point to monitor the health of our planet. Sentinel-5P is one of seven Copernicus satellites in orbit today. It currently provides the most accurate measurements of NO2 and other trace gases from space,” explains Josef Aschbacher, ESA’s director of Earth observation.

“As NO2 is primarily produced by traffic and factories, it is a first-level indicator of industrial activity worldwide. What is clearly visible is a significant reduction of NO2 levels over China, caused by reduced activity due to Covid-19 restrictions.”

Slowdown took out the equivalent of almost 1.5 billion tonnes of CO2 in China and could curb global emissions from air travel by 11 to 19 per cent, according to Bloomberg Intelligence. As Ireland is not heavily industrialised, effects here are less pronounced but discernible with restrictions ratcheted up in the past fortnight.

Greenhouse gas emissions are audited on a yearly basis by the Environmental Protection Agency, whereas air pollutants are monitored on a real-time basis. The March bulletin will show a downward curve but up to February it was very much business as usual with 18 exceedances of European Union NO2 limits, mainly in Dublin.

The 2009 crash coincided with the only significant drop in our carbon emissions in the past 20 years. At present, we are among the worst emitters on a per capita basis due to transport, agriculture and poorly-heated buildings reliant on fossil fuels, while increased urbanisation has resulted in often dangerous levels of air pollution.

With recent declines, some pollution emissions such as those associated with traffic are likely to be reduced and therefore will reduce air pollution damage to one’s respiratory system, according to Prof Colin O’Dowd of NUIG Centre for Climate and Air Pollution studies. These emissions, however, “are likely to have already caused damage previously, perhaps weakening one’s defence”.

His colleague Dr Clare Noone notes air pollution is estimated to be responsible for eight million deaths per year and fossil fuels are largely to blame. “If you live in an area with poor air quality you’re already vulnerable to many health effects, and the associated lung damage from air pollution may worsen those infected with Covid-19.”

Once the pandemic has passed, she hopes valuable lessons will be learned about the importance of the air we breathe and our health. “Putting our health and the health of the planet first will mean moving away from fossil fuels . . . to clean renewable energy. More than ever, the time to act on climate and the time to act on health is now.”

Coronavirus-prompted trends show what collective action could do in rapidly countering global heating caused by human activity and is already prompting the big question: to what extent recovery will be infused by green actions?

Climatologist Prof John Sweeney of Maynooth University says the circumstances are “not the way we would like to tackle climate change” – it is likely to buy some time but prove to be a temporary respite.

That said, there is a possibility of change for the better in adopting a more sustainable way of living. In bailing out industries, especially carbon-polluting ones, governments should be conscious there are other ways of doing it, he believes, citing former US president Barack Obama’s rescuing of the US auto industry after the 2009 crash – on condition that vehicles were made more fuel efficient.

This approach should be applied to the aviation and shipping sectors if vast amounts of taxpayer funds are going to be channelled to their benefit, believes Prof Sweeney. Otherwise it would be back to business as usual.

However, it is already clear the pandemic will prompt behavioural change. There was likely to be a fall in business travel. “We are seeing that people commute more readily by mouse rather than by car or train,” he says.

“Reduced emissions buy the planet a little time but not more than a few years,” he says.

Eminent climate scientist Prof Katharine Hayhoe says she is being constantly asked what Covid-19 has to do with climate change? Her response: “The short answer is very little, but the long answer is everything is relative.”

The death toll already caused by climate disruption will be seen to outstrip the worst World Health Organisation predictions for coronavirus, she predicts.

Coronavirus is being spread by humans, while climate disruption is not significantly affecting spread. “That one’s on us. It goes where we go.”

With predictions of warmer winters, a likely consequence is earlier and more severe flu seasons, she said in a Twitter exchange. As the planet warms the flu season could end up being year round and this would give it more time to mutate into more dangerous strains.

All of which is just another indication that climate change is “a threat multiplier”. Meanwhile, the other side of the coin is “what will this terrible pandemic do to our emissions?”

It is already slashing fossil-fuel use and corresponding carbon and air pollution emissions in China, Italy and beyond. “I think it’s too early to say whether we will see a net long-term decrease in carbon emissions from this alone. Industrial production is likely to ramp back up after the crisis passes. But I do hope it will show us there is a different way to live,” adds Prof Hayhoe.