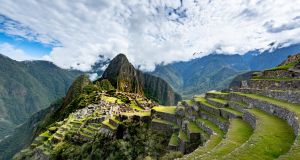 A file image of Machu Picchu in Peru. The Government has been given approval to send a repatriation flight to the country to pick up more than 100 Irish citizens who are stranded as a result of restrictions introduced in response to the coronavirus pandemic. Image: iStock.

The Government has been given approval to send a repatriation flight to Peru to pick up more than 100 Irish citizens who are stranded as a result of restrictions introduced in response to the coronavirus pandemic.

The Department of Foreign Affairs said in a statement that following a call between Minister Simon Coveney and his Peruvian counterpart “diplomatic clearance” had been secured for the flight to leave at 4pm on Sunday. The Government has been partnering with the UK embassy in Lima in arranging the flight.

“Our Embassy in Santiago is in contact with our citizens on the ground in Peru keeping them informed,” the department said.

“A large amount of effort is also going into arrangements for the internal transport of our citizens, especially from Cusco to Lima. That remains a very challenging situation and we are doing everything that we can in order for this to take place as planned over the next couple of days.”

Around 135 Irish tourists, most of them backpackers, are awaiting repatriation after the Peruvian government ordered the closure of its borders on March 16th as it imposed a strict 15-day national lockdown in response to the pandemic. Around half of them are thought to be outside Lima. Some of the Irish nationals in Peru have reported having to stay in shared hostel rooms for up to 23 hours a day because of the restrictions.

The Irish ambassador in Chile, Paul Gleeson, has been coordinating the repatriation effort on the ground. Irish citizens in the cities of Cusco and Arequipa are expected to begin the journey to Lima on Saturday while others face a longer journey to the capital.

They have been awaiting details of the flight since Sunday when Mr Coveney said an agreement had been reached between British Airways and Aer Lingus to charter a plane from Lima “in the next few days”.

Galway native Gearóid McKendrick, who is in Cusco, said he was relieved to hear the flight had been arranged but remained “cautious as we’ve seen other nations being turned back when they are on buses to the airport”.

In his communication announcing the flight, Mr Gleeson said officials were aware that some Irish nationals might not be able to leave because of quarantine restrictions. “I’d like to reassure those citizens that we will be continuing to work with EU and UK partners to identify solutions to bring you home as soon as circumstances allow,” he wrote.

Rhys McKendry from Belfast said he was worried that he could miss the flight due to the quarantine at his hostel and is awaiting a call from the embassy to update him.

“I am still totally in the dark,” he said, adding that he had hoped to take a Covid-19 test to prove he was negative so he could travel.

“But I haven’t had any update on testing. Ministry of health instead showed us how to wash our hands, instead of interviewing us as promised.”

Irish travellers stuck in Peru contacted by The Irish Times have expressed their appreciation for the efforts of Irish diplomats.

“In my opinion I think the Irish Government have been doing everything they can behind the scenes,” says Mr McKendrick. “It sounds like the block has been coming from the Peruvian side. Tourists from other countries in Europe stuck here have been receiving the same information from their embassies about limited numbers of planes allowed to come into the country and airspace being closed and that causing complications in organising the flights.”

For the department the challenge of getting Irish people stranded abroad because of the pandemic has been unprecedented. Global aviation is currently experiencing the largest shutdown in its history, with airspace across some regions closed off.

An estimated 2,000 Irish citizens have been caught up in the crisis. Most are in Australia and New Zealand but diplomats are dealing with cases in 86 countries in total. In recent days the priority has been to try and get as many Irish people as possible onto the rapidly shrinking number of commercial flights.

Until next week at the earliest there are no commercial flights permitted in or out of Peru. Frightened by the threat Covid-19 posed to its fragile health system, Peru moved swiftly to shut itself off from the outside world.

As well as those from Ireland there are thousands of tourists from other European countries, Latin America and the US among others stuck in the South American country.