Weather advisory in place for Wexford, Cork and Waterford until 8pm 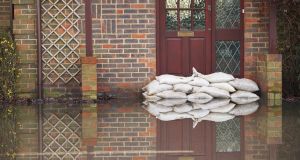 Parts of Cork remain flooded this evening and some road diversions are in place. File photograph: iStock

Parts of Cork remained flooded on Tuesday evening after the remnants of an Atlantic storm passed along the south coast of Ireland.

A weather advisory is currently in place for counties Wexford, Cork and Waterford with a combination of high tides, strong winds and heavy bursts of rain impacting the south coast. The advisory, which was issued on Monday, is in place until 8pm on Tuesday.

Cork appears to be the worst affected where Sharman Crawford Street and Wandsford Quay are closed due to flooding. Diversions are in place.

Also in Cork, the Kinsale/Ballinspittle Rd (R600) is closed at World’s End due to coastal flooding, while Union Quay and Morrisons Island are also closed. AA Roadwatch has advised motorists to avoid the area.

Cork City Council have advised that no parking will be permitted at Father Mathew Quay and Frenches Quay until 7am on Wednesday due to high tides.

Outside the #Cork School of Music pic.twitter.com/EujmUVngLx

In addition, South Terrace, Kyrls Quay and Lavitts Quay were closed to traffic until 6.30pm as there was a “significant risk of flooding” in the city. There is a high tide at 5.34am on Wednesday.

Drivers are generally urged to use extreme caution due to the possibility of spot flooding and debris on the roads.

Earlier, the Rock Road in Dublin was flooded as commuters tried to make their way to work.

Met Éireann said rain will continue through Tuesday night, mainly in the south and east with a few heavy bursts.

Elsewhere, drier conditions will prevail with just the odd shower. A few patches of mist and fog will form. Lowest temperatures will range from 4 to 8 degrees.

Wednesday will be a brighter day with good dry spells. Some scattered showers will occur also with the odd heavy one in eastern areas.

It is due to turn cold on Thursday night, especially in the north and east where temperatures will drop back to between -3 and 0 degrees under clear skies, leading to frosty conditions.

Friday is expected to be dry and bright with some sunshine and daytime highs of between 4 and 8 degrees in light easterly breezes. Conditions will turn cold and frosty on Friday night with temperatures below freezing in the north and east.

The weekend looks set to be dry and sunny for much of the country. Some rain will affect southern counties through Saturday with highest temperatures between 4 and 7 degrees.