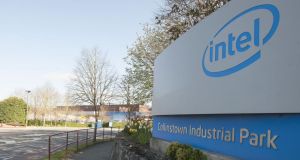 Site expansion and the related investment will be taken in stages and are subject to change based on business, economic, and other factors, an Intel spokeswoman said. Photograph: Dave Meehan/The Irish Times

Chip manufacturer Intel has welcomed planning approval for a new €3.6 billion manufacturing facility at its campus in Leixlip, Co. Kildare.

The project is among the largest single private investments in the history of the State. However, a further judicial challenge to the permission has not been ruled out by objectors to the project.

Thomas Reid, the farmer who successfully sued the state over an attempt to compulsorily purchase his land, and environmental activist Peter Sweetman are both understood to be considering a judicial review of the An Bord Pleanála decision.

A spokeswoman for Intel said the company “welcome[s] the decision by An Bord Pleanála to grant permission to our planning application”.

Site expansion and the related investment will be taken in stages and are subject to change based on business, economic, and other factors, she said. It is understood that the first phase of the project could open within about two years if no further obstacles are placed in the way of building work.

Mr Sweetman and Mr Reid lodged separate objections or observations to the planning process, which culminated in the board’s decision to award permission for the project yesterday.

When contacted, Mr Sweetman said he would review the board’s decision “and see whether it’s a legitimate decision or a wrong decision”. It is understood that he is likely to take a judicial review if he believes the decision is flawed.

Mr Sweetman has a track record of objecting to and reviewing multiple cases. Last year, he took a High Court challenge against the granting of permission for a €100 million data centre planned by Amazon near Blanchardstown. Court records show he has taken more than 60 judicial review cases in the past 10 years, and he has objected to schemes such as the expansion of the Trump International Hotel at Doonbeg in Co Clare.

He lodged an observation with Kildare County Council during the planning process, but did not make a full objection to An Bord Pleanála.

Mr Reid, whose lands adjoin the Intel site, would not be drawn on his intentions, but he said he believed the Intel facility would never be completed. In 2015, Mr Reid won a supreme court challenge against the IDA, which tried to execute a compulsory purchase order on his farm. Intel Ireland has described his objection as “vexatious”.

He told The Irish Times that he has already made a complaint to the European Directorate-General for the Environment, alleging breaches of habitats, environmental and conservation directives had already taken place. he two men are understood to be in dialogue concerning planning application.

An Bord Pleanála yesterday said it was satisfied that the development would not have a significant effect on European special areas of conservation nearby. It found that “the proposed development would constitute a reasonable and orderly expansion of the existing manufacturing use at this location” and “would not seriously injure the amenities of the area or of property in the vicinity.’’

The board said that the effects of the proposed development on the environment would be mitigated by the positive long-term impacts on population and employment creation during both construction and operation of the plant.

Planners also gave the green light to an Eirgrid proposal, submitted in a separate application, to construct a new 220kV substation to manage increased demand for power at the site. Yesterday’s permission follows approval of the first phase of the project some three years ago. Together, the two permissions represent an $8 billion investment.

The inspector’s report shows that the objections and observations made by Mr Sweetman and Mr Reid were considered and discounted.