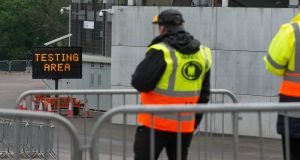 A lack of coronavirus testing kits has forced the closure of the country’s biggest testing centre at Páirc Uí Chaoimh in Cork.

The Health Service Executive confirmed that the testing centre at the GAA stadium had to close on Sunday due to the lack of testing kits.

“I think that’s down to the availability of testing kits and I think they will be up and running again very soon. That’s my understanding, as in tomorrow,” said the HSE spokesman.

The Páirc Uí Chaoimh testing centre – one of 46 in the country – opened last week with plans to test up to 2,000 people a day at the facility when it is running at full capacity.

The facility has 10 testing bays and those with appointments drive into the stadium in batches and are swabbed by test teams wearing protective clothing.

The HSE said that more than 33,000 people have been tested since the criteria was changed limiting testing to people showing two major symptoms rather than one before they can be tested.

More than 15,000 people are still waiting to be tested for the virus, also known as Covid-19, since this change.

The HSE has 46 testing centres in operation and a further six will come on stream next week. Up to 60,000 testing kits have been delivered and a further 100,000 will be delivered each week.

HSE chief executive Paul Reid said the State was “hitting very significant pinch points” in its capacity to carry out tests, particularly in the laboratories testing for positive Covid-19 cases.

Mr Reid said that there was “very significant pressure” on the availability of reagents, the extraction element used in a test kit that goes to the laboratories to check if a patient has the disease.

“We need to solve this problem,” he said.

He said he was working “at very senior levels across Government” to remove this “pressure point” on reagents and lab capacity as it would affect the State’s capacity to increase testing.

A spokeswoman for the HSE said that it was “up-to-date” on referrals for testing in the Cork and Kerry area and will offer appointments on Monday for any outstanding referrals.

1 ‘Frustrated and angry’: Thousands march in Dublin to protest death of George Floyd
2 Covid-19: Easing of restrictions ‘unlikely’ to be speeded-up
3 Couple injured in shooting incident at farm in Co Waterford
4 Coronavirus: One more death in Republic as expert warns house parties are ‘disaster’ for containment
5 US: Trump threatens to deploy military to end protests
Real news has value SUBSCRIBE