Husband unable to say farewell to wife of 51 years 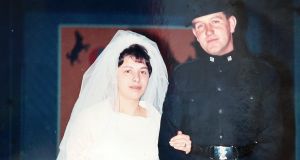 Anne and Tom Best on their wedding day: “It is unimaginable, I don’t think we have ever faced anything like this in our time, in my 77 years anyhow,” says Tom. Photograph: John McVitty

Retired Fermanagh civil servant Tom Best last saw his wife of 51 years alive when she was being placed in an ambulance and driven away from the couple’s Derrylin, Co Fermanagh, home last Wednesday afternoon.

Seventy-two-year-old Anne began to complain of severe pains last Monday. Given the arrival of Covid-19, and her underlying medical conditions, the couple’s doctor, Michelle McBrien quickly called an ambulance.

Within 24 hours, her condition worsened and she died in Enniskillen’s South West Acute Hospital without seeing her husband again. Anne Best was the first person to die of Covid-19 in the county.

Typically, Fermanagh’s funerals are like those elsewhere on the island, where the bereaved enjoy neighbours’ support as they cope with loss. Today, that is no longer possible. Covid-19 has changed the way people live and die.

On Saturday, Anne was buried at St Ninnidh’s cemetery in Derrylin, again without her husband watching over her. He has been told to self-isolate at home for 14 days, unable to say farewell to his soulmate.

Under a bright blue sky, there was no funeral. A handful of mourners watched from afar as the coffin with a single white rose was lowered by gloved gravediggers. Parish priest Gerard Alwill read prayers. Undertaker Pat Blake stood nearby.

“It’s breaking my heart, it’s just breaking my heart that I couldn’t be there when she died, or at the funeral,” an emotional Tom told the Impartial Reporter newspaper, in an interview he wanted to do “to make people take notice”.

Clutching a photograph of his wife, Tom paced up and down his garden, a short distance from where his wife was being laid to rest. It was all that he could do.

“I am not going to break all the rules and walk up there and see her. I’m not going to do that because that would not be right; it would be selfish on all the people of Derrylin,” he said.

Recalling how his wife had begun to feel unwell, Tom said: “She said ‘I feel awful, awful sick’. There was a lot of moaning . . . if you could hear someone groaning and moaning. And she could take pain,” he said.

Paying tribute to Dr McBrien for her care on Monday, he went on: “Michelle is brilliant, she is an angel and let no one say different. She spoke to [my wife] on the phone and said she would get an ambulance.”

Because he was unable to leave his home and due to hospital restrictions, Tom could not be by his wife’s side. Later, he received the heartbreaking call from a hospital doctor telling him of his wife’s death.

“I got a call on the Wednesday night explaining that things were not looking good. I’ve been around a lot of death over the years and I can put two and two together. When it comes to your own door, you just fall apart and that is a fact.

“I told the doctor whatever you are doing, you are doing your best. Then he said the next call will be the one to tell me she was gone. ‘You can be expecting it’ he said,” explained Tom. That call duly came.

With tears rolling down his face, he struggled with loss; remembering some little things they enjoyed together – a favourite TV crime series or his habit of making her breakfast each morning. From now, he will be in the house alone.

“What impact has it had on me since she died? That’s the big...you know, I don’t know what I can do. The last time I saw her was when she was being put into the ambulance and looking down and that’s it.

“It’s heartbreaking, it’s heartbreaking. I wouldn’t wish it on anyone, that is a fact. Maybe some good will come out of it. It is unimaginable, I don’t think we have ever faced anything like this in our time, in my 77 years anyhow.

“You might wonder why I wanted to cook her breakfast and do things for her,” he said, folding the photograph of the couple’s wedding day in Gibraltar in 1969 and placing it back into his pocket.

The reason is simple. “I loved her.”