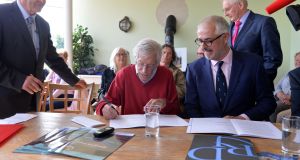 Gregg Bemis signs over legal ownership of the wreck of the Lusitania to the Old Head of Kinsale Museum. Photograph: Michael Mac Sweeney/Provision 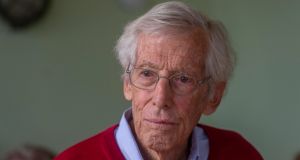 Gregg Bemis: ‘I’ve come to realise that, at almost 91 years old there is only so much more I can do to further this project.’ Photograph: Michael Mac Sweeney/Provision

The owner of the Lusitania, which was torpedoed off Co Cork with the loss of over 1,200 lives during the first World War, has transferred ownership of the wreck to a local community group planning to build a commemorative museum on the nearby Old Head of Kinsale.

“I’ve come to realise that, at almost 91 years old there is only so much more I can do to further this project and I think because of the Lusitania’s part in history, it’s very important that it be done properly and we get all the artefacts we can from the wreck to put in the museum planned for here.”

He said he now felt it was time for him to step aside from his work to remember the 1,201 people, including three German stowaways, who perished on board the ship and he was happy to leave that in the hands of locals who had done such a fine job in remembering the victims with the Lusitania Memorial Garden

Mr Bemis explained the deed of gift won’t become effective immediately in case it might impact on the local museum committee’s ability to raise funds from government departments and State agencies but will be held in escrow and activated at short notice in the event of his death or when the museum is built.

He said that he hoped the Old Head of Kinsale Lusitania Museum Committee would continue with investigating what caused the second explosion which caused the liner to sink in just 18 minutes and confirm his long-held suspicion that it was because the ship was carrying war munitions.

Old Head of Kinsale Committee member, Jerome Lordan thanked Mr Bemis for his generosity in transferring the wreck to the committee’s ownership given its importance in terms of the impact its sinking had on the first World War, prompting the US to enter the conflict on the side of the Allies.

“This is a truly historic occasion given the significance of the Lusitania in the pantheon of famous vessels lost at sea – the story is up there and only surpassed by that of the Titanic in terms of Atlantic maritime disasters – the loss of so many civilian lives brought the Great War to a new low.

“We are indebted to Gregg with his vast maritime expertise to bequest to us this historic wreck and its contents. It shows the great trust he has in our group to honour all commitments going forward and we are committed to honouring this trust.”

Con Hayes of the Old Head of Kinsale Museum Committee said that design work has still to be finalised on the proposed museum but the committee estimate it will cost €3 million to build and a further €1 million to equip with interactive features to tell the story of the sinking of the Lusitania.

“We’re doing a lot of advance of work, but at the moment money is the problem. We’re hoping to get funding from the State and from Cork County Council and Fáilte Ireland because we believe it has the potential to become an important tourist attraction in west Cork,” he said.