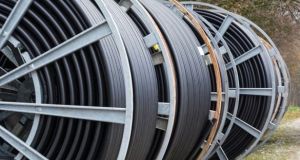 The decision was made after a lengthy cabinet discussion today. File photograph: Getty Images

The Cabinet has decided to award preferred bidder status for the National Broadband Plan to the sole remaining bidder in the competition, the national Broadband Ireland consortium led by the US businessman David McCourt.

The decision was made after a lengthy cabinet discussion on Tuesday.

The value of the contract has been capped at just under €3 billion and requires the company to build and operate the network for 25 years, with an option for the state to extend for a further 10 years. The network will not be owned by the state after the conclusion of the contract.

The Minister for Communications Richard Bruton said the investment will have a transformative effect on rural Ireland, “future-proofing communities for generations to come”.

“Digital technology is revolutionising how we live, learn and work and we want to make sure rural Ireland is not left behind,” he said.

The Taoiseach Leo Varadkar said that already some multi-nationals employ a quarter of their staff from home but many people living in rural Ireland are excluded from doing so as they require high-speed broadband and secure connections.

“Access to broadband affects many parts of Ireland, and it requires a national solution. So that we can connect with the world, with family members, with businesses, with new ideas and new ways of doing things,” he said.

The Department of Communications said the rollout of the plan will commence in the last quarter of 2019 with significant pre-mobilisation activities ongoing over the next number of months.

It added that the plan will supply broadband to the one quarter of Irish people and premises which currently cannot access high-speed broadband through commercial services. “It guarantees a level playing field for 1.1 million people, 540,000 premises including 100,000 businesses and farms, and over 600 schools, where commercial operators will not commit to deliver high speed broadband”.

Speaking at the announcement in Dublin, Mr Varadkar said: “Broadband will be the biggest investment in rural Ireland ever and perhaps the most significant one since rural electrification.

“People will be able to set up and run a business anywhere in the country and access international markets from most rural and island locations. We’re only really beginning to see how the world is being transformed by digital technologies and we cannot allow any part of our country to be left behind.”

Mr Varadkar said the scheme would ensure that every home, school, farm and business across the country has access to high-speed broadband.

“In doing so we’ll be one of the first countries in the world to achieve this,” he said.

The rollout of the plan is expected to take seven years.

The Taoiseach said the project was about connecting Ireland to the rest of the world. “When it comes to connecting our people to the world we must pay the price of progress now or we risk staying trapped in the past forever,” he said.

“It’s about making sure this time rural Ireland isn’t left behind. We have a digital divide between rural and urban Ireland and that’s growing. By going ahead with the National Broadband Plan we can end that divide - if we don’t go ahead we’ll never end it.”

Mr Bruton described the Government’s decision to sign off on the plan as momentous. “It shows the determination of Government to ensure that we do have an inclusive Ireland, that rural Ireland is as important as urban Ireland, and that we can sustain and support regional development by having a strong broadband network,” he said.

The National Broadband Plan was first announced in 2012 by then communications minister Pat Rabbitte. Since then it has been mired by delays and setbacks. At the outset there were five bidders. Three were selected as preferred bidders but two pulled out, leaving one consortium in the running.

Last October, former communications minister Denis Naughten stepped down amid controversy over the rural broadband plan after it came to light that he held previously undisclosed meetings with the head of the last remaining bidder.

An independent review was commissioned by the Taoiseach following concerns about the procurement process, but it found it had not been influenced by Mr Naughten or businessman David McCourt, who is part of Granahan McCourt.

The cost of the project was originally estimated at between €355 million and €512 million, but last month Mr Varadkar confirmed the cost would end up being closer to €3 billion. He maintained that the original cost estimate of €500 million was for a very different project.