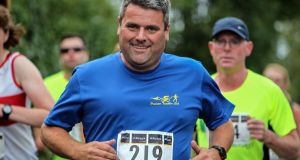 Michael McDonagh: ‘If anything it (asthma) made me a stronger person as every setback was something that had to be dealt with.’

A diagnosis of asthma made life difficult for the young Michael McDonagh and continued to hinder his potential for two decades.

“When I was a teenager I was diagnosed with asthma and regularly suffered shortness of breath, coughing, wheezing and had trouble sleeping so I was always tired with little energy,” says the Galway man who is married to Stephanie and has two children - Clodagh (11) and Michael (8).

“I also suffered with hay fever and needed to use the quick relief inhaler a lot as time went on. Each episode involved a lot of medication and hospital admissions - I just couldn’t get it under control. It put a lot of pressure on all aspects of my life and I remember being so tired that I would sleep on the couch at lunchtime and would be hospitalised just to recover. As I got older I would be absent from work, family events and social occasions and participation in sport was never an option as I could never be without an inhaler.”

McDonagh (45), who is the director of an adult education centre, spent 20 years struggling to control his asthma. He says it was only when he learned how and when to administer medication that he started enjoying life to the full.

“In hindsight I was playing Russian roulette as I was only dealing with my asthma when it was bad,” he says. “And as time went on the episodes escalated and I was regularly admitted to ICU. On one occasion I woke in hospital to see my parents and a priest looking down on me, and was so tired I didn’t process what was happening.”

Having struggled for 20 years with the condition, the father of two had a bad attack after his son was born and knew that finding a solution was crucial.

“The week before my second child’s christening I became very sick and realised that something had to be done, so I changed consultants and started attending a respiratory clinic,” he says.

Together with doctors he put together a long term asthma plan and changed his lifestyle - taking up running and finally joining a local triathlon club.

“If anything it (asthma) made me a stronger person as every setback was something that had to be dealt with,” he says. “Since making these changes I have had no episodes, no hospitalisation and no need for the reliever inhaler - last year I even participated in the 100km Croi Cycle, a 5km hospice swim and the Dublin marathon.”

Another reason it was important for the chronic asthmatic to get a handle on his condition is because both of his children also have asthma. And he now believes it’s not an illness as long as it is managed properly.

“Asthma is part of our life as opposed to a problem in our life,” he says. “It cannot be cured, but with proper treatment it can be well-managed so there is no reason why everyone with asthma can’t live a full and active life, symptom free.”

Asthma Action Plans can be downloaded from www.asthma.ie or ordered over the phone on 1800 44 54 64 or picked up from Boots stores nationwide.