Asthma deaths in Ireland are on the rise, charity warns 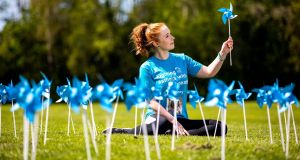 Ciara Kelly, whose mother Emer died from her asthma in 2018 is pictured here with 72 windmills, representing those who die every year from asthma in Ireland. Photograph: Keith Arkins

Deaths among people in Ireland with asthma are on the rise and Ireland now has the fourth highest prevalence of the condition worldwide, the Asthma Society of Ireland has warned

Sarah O’Connor, chief executive of the society, said it was “frightening that asthma deaths are on the rise in this country”.

She said while the prevalence of asthma was in decline in some countries, new figures show 72 people a year were dying in Ireland as a result of the condition.

To mark Ireland’s first Asthma Awareness Week the society has published the findings of an asthma management survey which she said highlighted a huge lack of awareness about how to manage asthma.

She said the survey results showed that “in the event of an asthma attack, most people wouldn’t know the necessary steps to take to save a life.”

The Asthma Society of Ireland is encouraging people to reduce their risk of a fatal attack by getting an asthma action plan to suit their symptoms.

An estimated 470,000 people in Ireland have asthma and 60 per cent do not have it under control; greatly increasing their risk of suffering a fatal attack.

According to Ms O’Connor, every person who has the condition should have an asthma action plan - particularly as research shows having such a plan made a fatal asthma attack “significantly less likely.”

In conjunction with survey findings that only two out of three asthmatics are managing their symptoms correctly, the survey also found the condition is on the rise in Ireland.

Dr Marcus Butler, Medical Director of the Asthma Society and respiratory consultant in St Vincent’s Hospital with a special interest in asthma, COPD and lung cancer, said there has been an increase in prevalence in many countries, while some which already have had high levels of asthma in the population have levelled off or slightly declined.

“People in general have greater awareness of the various symptoms and features of asthma,” he says.

“This in turn has led to greater diagnostic recognition and accuracy. It is also quite likely that changes in the risk factors or triggers that can worsen asthma are responsible for much of the increase in asthma prevalence seen around the world.

“The reasons for the levelling off or decline in the rates of asthma in some countries remains unclear.

“Science points toward the belief that rapidly changing exposures and lifestyles led to asthma developing in susceptible individuals in the latter half of the past century, but the proportion of the population that is susceptible, perhaps genetically, to developing asthma is now reaching a maximum capacity.

It is also possible that with more appreciation of the risk factors and faster dissemination of this information to the public has led to these changes in the trends of asthma prevalence.”

“I encourage everyone to put an asthma action plan in place - it is the one of the best asthma management tools available.”

A survey of almost 1,060 asthma sufferers in Ireland conducted last month also found two thirds have not consulted with their healthcare professional in the past six months.

Half of those surveyed said they used their reliever inhaler - used to ease symptoms - more than the recommended twice a week.

Three out of five people said they did not use their controller inhaler - used to reduce the likelihood of an attack - all year round.

It also found nine out of ten people do not carry an asthma attack card and one in five people with the condition do not know the six most common symptoms of an asthma attack.

In order to address these issues, the asthma society will kick off its first ever road show travelling around the country offering advice and information.

The roadshow will allow people with asthma to meet a respiratory specialist nurse. This week it will be at Mahon Point Shopping Centre in Cork on May 8th, ( noon to 4pm), Eyre Square Shopping Centre on May 9th (2-6pm) and Letterkenny Retail Park on May 10th (noon to 4pm).

Asthma Action Plans can be downloaded from www.asthma.ie or ordered over the phone on 1800 44 54 64 or picked up from Boots stores nationwide.