‘What more could you want from a day? Even the sun is blazing,’ says 87-year-old islander 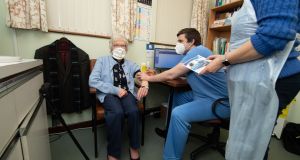 It is a beautiful day on Arranmore Island, and not only because the sun is shining.

“It’s been the best day for the last year,” says Dr Kevin Quinn. “I’ve never seen as many happy people coming into the surgery this morning. There’s overall happiness. A corner has been turned.”

The first Covid-19 vaccines were administered on the Donegal island on Monday; the injections began with the over-85s, including 87-year-old Patrick Ward.

“I’m absolutely delighted,” he says. “What more could you want from a day? Even the sun is blazing here.”

Dr Quinn says: “People were delighted to have the vaccination and get out of the house and have something positive.

“We were very lucky to get vaccines and I think a lot of people thought we would be down the queue and we would have to wait and perhaps go over to the mainland, but they were so delighted to get it in their own surgery in a timely fashion.”

The supply of vaccine arrived on the island on Friday by Air Corps helicopter; the Moderna vaccine, which is being used on the island, is easy to use, says Dr Quinn. “It doesn’t require any re-dilution, it’s just take it out of the fridge and let it come to room temperature so we can get people vaccinated very quickly.”

The past year, he explains, has been a quiet one on Arranmore. The island has had its cases of coronavirus, which were mainly imported, but there was little community transmission.

“People did pick up Covid in hospitals as well. Letterkenny had quite a lot of cases and it was inevitable but, by and large, none of that has spread into the community so people have been very good at following social distancing and keeping to the guidelines.”

Covid-19 has confined many of the elderly to their homes, and restrictions on travel have affected not just Arranmore’s tourist industry, but the many islanders who now live either on the mainland or in the UK, and who have been unable to travel home.

“A lot of people have families away... they weren’t getting visitors. We haven’t seen our son for over a year now, and it’s the same for everyone, just not getting the usual contact apart from phone calls,” says Dr Quinn.

That said, he has been “surprised” to hear of the number of people who came home during the pandemic, self-isolated for two weeks, and are now working remotely from the island. “There are probably about 50 people doing that.”

By the day’s end, more than 80 people on Arranmore, including all those over 75, have been vaccinated. Dr Quinn says they will issue the rest of the batch on Tuesday which should inoculate all over-70s and those with underlying conditions.

For Dr Quinn, the day’s greatest significance is that people can now look forward to better times.

“Living on an island makes you quite resilient to a lot of things, and I think that resilience has helped a lot of people get through this.

“I think everyone’s at the end of their tether at the moment, and people’s mental health is suffering.” For the elderly in particular, “this will hopefully let them get back to some kind of normal socialisation”.

Ward has been at home since last March; with joy in his voice, he explains that “in a little while... it’ll be all over”.

He emphasises that he wants to thank the staff at Arranmore Health Centre “for looking after us so well, and the Government for sending a helicopter to deliver the vaccine into the island”.