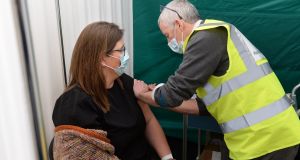 Tomorrow is an important day for the Coalition. After a week of often confused and inconsistent messages to the public about the next phase of managing the pandemic, Taoiseach Micheál Martin has an opportunity to speak directly to the public about what the coming months look like.

Officials and Ministers are praying he gets it right, but some privately fear that the Government is approaching the point at which the public gives up on it and switches off. That is a very difficult position from which to recover.

Several sources in different parties acknowledged that there have been confused messages from the Government in recent days and weeks. Two weeks ago Ministers and other senior figures in Government, including Tánaiste Leo Varadkar, were talking about reopening construction and schools after the current lockdown expires on March 5th.

In recent days, the Taoiseach and public health officials have been adjusting those expectations. It is now becoming clear that it will be the middle of April before there is any chance that all pupils will be back at school and all construction sites will be open – and even that depends on a continuing decline in the rates of infection. As for a wider reopening of social and economic life, there appears little prospect of lifting the restrictions on retail or travel, or of a return to office work, in the coming weeks.

The Taoiseach’s challenge when he speaks to the country on Tuesday, insiders say, is to inject some hope into this otherwise gloomy message – to show people that there is a realistic path out of lockdown, even if it is some way into the future. That task has undoubtedly been made more difficult by the recent confusion.

That confusion stems in part from the inherent uncertainty of the pandemic: how can you know what it is safe to reopen when you don’t know where virus numbers will be in three weeks’ time?

But it is also a result of two other factors that are within the Government’s power to correct. The first is the frequent lack of coherence at the centre of the administration, principally between the leaders of Fine Gael and Fianna Fáil. This remains a Government with two poles, and the principals that dominate them are often not singing from the same hymn sheet. More and more, people surrounding the administration refer to this problem. While parts of the Government have learned to present a sense of shared purpose, that is frequently not the case at the centre.

The second factor is the destruction of the Government’s self-confidence – greatly undermining its capacity to act – that occurred as a result of the third wave of Covid-19 over Christmas and in January. Sources across Government attest to this issue: the loss of confidence, political capital and authority. In the autumn, Ministers believed that they were doing a good job and that the public was largely on board with their efforts to manage the pandemic. That sense has evaporated since the Christmas wave.

Some of the more phlegmatic people around Government are urging their colleagues to take the medium-term view. Things will look very different in April, they say, when large-scale vaccinations will be under way (they hope) and reopening will be a realistic expectation.

Ultimately, the Government’s approach is that vaccination will make the difference. But politics lives in the moment. Between now and April-May, when the vaccination programme is due to gather steam and make a difference, there will be difficult waters to navigate. The Coalition’s hope is that the Taoiseach can set a course on Tuesday.

4 Up to 600 doctors may leave Irish health system in July, IMO warns