Level 5 restrictions set to be extended until April, but schools and childcare will reopen 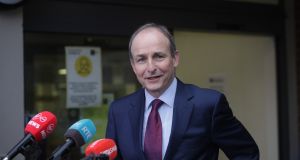 As signalled by Taoiseach Micheál Martin in recent days, almost all aspects of the lockdown will be extended past March 5th. Photograph: Gareth Chaney / Collins Photos Dublin.

The Government is set to announce on Tuesday that Level 5 restrictions will be extended at least until April.

There will be no major lifting of restrictions next month, aside from the reopening of school and childcare, under the new plan to be announced on Tuesday.

Ministers and senior officials met at Government Buildings on Monday evening to approve the Government’s revised Living with Covid plan which is expected to extend the current lockdown into April.

Government sources said the return to schools and childcare will be the focus, and is a significant risk to manage without reopening more broadly. The emphasis will remain on driving infections lower in the coming weeks, and avoiding a fourth lockdown at all costs, sources said. The restrictions will be reviewed again on April 5th.

Schools are expected to begin reopening from March 1st while childcare will resume on a phased basis, beginning with the ECCE preschool scheme on March 8th.

The Cabinet sub-committee approved the plan on Monday night and it will now be brought to a full meeting of the Cabinet on Tuesday morning and will be announced publicly in the afternoon.

Schools will be partially reopened in March. Junior and senior infants, first and second class and Leaving Cert students will return on March 1st. That will followed by a further reopening two weeks later on March 15th for other primary school pupils and fifth years, it is expected. Under this plan, though it is yet to be approved by ministers, the remaining secondary school students will not return until after the Easter holidays, on April 12th

Minister for Health Stephen Donnelly said, however, that he could not confirm which classes would go back to school and when. He said that his understanding was that the Nphet advice which was given to him applied to junior and senior infants only. He said Minister for Education Norma Foley was still in negotiations with teaching unions “and the Cabinet hopes to be in a position to announce something tomorrow”.

Asked if he could understand people’s frustration with the lack of firm information on reopening of schools, “There is nobody more frustrated than Minister Foley about this, she’s been engaged with all the education partners on this, we want to get this over the line, and hopefully those talks can conclude in a positive way tonight or tomorrow morning”. He told Claire Byrne Live on RTE after the subcommittee meeting on Monday night that his understanding was that concerns had been raised and talks were ongoing

Mr Donnelly said a briefing from Dr Glynn last week to the Covid subcommittee was “sobering”.

He said the proposal that goes to the Cabinet tomorrow “will include recommendations on education, detail on economic supports and the public health response as well”.

“The Taoiseach and others have signalled and have been signalling for quite a while that we need to be cautious about what we’re doing. Nphet’s advice to me... was very, very cautious about opening up,” he told Claire Byrne Live.

“The indicators we’re looking at would make you nervous,” he said, citing a recent increase in the number of close contacts per recorded case. Four weeks ago, it was at two, he said, and in the last four weeks has grown to 2.4.

Leaving Government buildings on Monday night, Green Party leader Eamon Ryan said: “We’re still in a very precarious position; the focus is on making sure we do that safely, and get some hope as well”

“If we keep those numbers down, keep the R rate below 1, it will start, it will be on a phased, gradual basis but first things first, is to take care in the next few weeks, we’re still in a very difficult situation and we have to be careful”.

Speaking on Monday night, senior Government sources acknowledged that the detailed reopening plan announced by Boris Johnson’s government may compare unfavourably with Ireland’s current approach. However, they argued that Britain’s approach was considerably more risky, emphasising that their priority was to avoid more lockdowns here.

As signalled by Taoiseach Micheál Martin in recent days, almost all aspects of the lockdown will be extended past March 5th, with a review likely at Easter. With Easter Sunday falling on April 4th, this means that by the time of the review, the country will have been in lockdown for more than three months.

No reopening of non-essential retail will be considered, while the construction industry will also be disappointed, despite signals from ministers in recent weeks that it could look forward to a March 5th reopening. However, Government sources say that large numbers of construction sites are currently open as they fall within existing exemptions.

People will be urged to continue working from home, and the Government will encourage people to continue to observe the restrictions in order to keep the R number - the average rate of infections from any one person with Covid - below one.

The Government is also expected to announce changes to the vaccination schedule, with people suffering from respiratory illnesses likely to be offered earlier vaccinations.

There is also likely to be an update on the plans to impose a mandatory quarantine in designated hotels on travellers from high risk countries. This morning the Minister for Justice Helen McEntee said that the legislation, which was first promised last month, would be finalised in the next two weeks.

Mr Donnelly said he is bringing legislation on hotel quarantine through the Dáil on Wednesday and Thursday.

In the current published list of vaccine allocations, people aged 18-64 with certain medical conditions are in category seven, while key workers in essential jobs who cannot avoid a high risk of exposure are category 10.