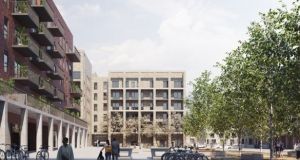 The proposed development at Shanganagh is the State’s largest social and affordable scheme with full planning permission.

Contractors for a €160 million project to build almost 600 homes in Shankill, in south county Dublin are being sought by the Land Development Agency (LDA).

The LDA and Dún Laoghaire-Rathdown County Council have planning permission permission to build 546 apartments and 51 houses at Shanganagh, south of Shankill Village.

Tenders have been issued by the LDA in recent days for contractors to undertake a 36-month building project to complete the scheme.

Work is expected to get underway later this year.

The estate will be the largest social and affordable housing development underway on State lands and is seen as a flagship project for the new agency. The almost 10 hectare site surrounds Shanganagh Castle, a former juvenile detention centre.

Of the 597 homes, 200 will be used for social housing, 91 will be sold to low and middle-income workers under the forthcoming affordable scheme, and 306 will be cost-rental homes, where the rent is based on the cost of financing, building and managing the housing.

These homes will be designated for renters who do not qualify for social housing but do not earn enough to compete in the general rental market. Rents are expect to range from about €1,000 for a one-bedroom apartment up to €1,300 for two-bedroom homes.

The development will also include communal resident facilities such as a gym, function room and co-working spaces, as well as a crèche, a shop and café.

The new homes will be within 10 minutes’ walk of a new DART station being developed by Iarnród Éireann at Woodbrook, north of Bray.

The Land Development Agency Bill, which will put the agency on a statutory footing, is currently before the Oireachtas.

While the agency is currently focusing on the the provision of housing on State land, it will have the power to purchase private sites.

It emerged earlier this month the Bill would enable local authorities to transfer lands to the LDA without securing the approval of councillors.

Dun Laoghaire Rathdown County Councillors two years ago voted to block the LDA from taking over the Shanganagh lands, but late last year agreed to the transfer following agreements on the detail of the scheme.