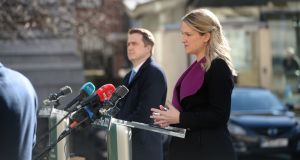 The Department of Justice plans to undertake the most significant reform of the courts sector since the foundation of the State, the department said on Monday.

The reforms will be focused on increasing access to justice for ordinary people and the reduction of legal costs.

The proposed initiatives are contained in the department’s 2021 Action Plan. The plan also commits to stemming anti-social behaviour and knife crime, reforming the State’s licensing laws, overhauling the immigration system and regularising the status of undocumented migrants.

“Legal costs in Ireland are prohibitive and act as a barrier to people exercising their rights before the courts,” the department said.

“We know too the effect these high costs and complex systems have on our economy and our competitiveness, whether those are the cost of buying a house, enforcing a contract or purchasing insurance.”

A new scale of legal costs will allow greater access to justice and “provide greater certainty on what people can expect to pay for legal services”, it said.

As well as establishing the long-promised judicial appointments commission to provide for the independent appointment of judges, the department said it will ensure judges, lawyers and Courts Service staff are more diverse and “reflective of modern Irish society”.

Work on a new scale of legal costs is to begin in the first quarter of this year. Scales will be drawn up independently, and the recommendations of the Kelly report on reform of the civil courts will be examined.

One of the issues to be examined is if limits on legal costs should be mandatory unless the parties involved in a dispute agree otherwise.

Further details were also released on the Government’s plans to extend pub opening hours after the Covid-19 pandemic.

The Action Plan states the department will liaise with the Night-Time Economy Taskforce “with a view to reviewing and modernising alcohol licensing”.

The new licensing regime will not be in place until next year, Minister for Justice Helen McEntee said.

She told reporters the licensing proposals are about bringing 19th-century legislation into the 21st century and “not just about having longer opening hours”.

This reform will involve consulting with local communities and the Garda as part of a “wider conversation” about the night-time economy, she said.

Regarding the immigration system, proposals for the regularisation of the status of long-term undocumented migrants and their families will be finalised by the end of March, with the new scheme allowing for this being launched in the second half of 2021.

The department also wants to cut the minimum waiting time for asylum seekers to access the labour market from nine months to six months.

Citizenship ceremonies have not taken place since the start of the pandemic, leading to a backlog in cases. The department intends to clear the current backlog of citizenship applications without holding ceremonies and to resume large-scale ceremonies as soon as it is safe to do so.

It also intends to pursue several new initiatives to make people feel safer in their communities and reduce the level of youth offending, particularly with regard to knife crime, it said.

This includes a review of existing Garda powers in relation to dangerous weapons “to ensure they have the necessary legal tools to protect our communities”, it said.

The legislation in relation to knife crime will also be reviewed in the coming months, Minister of State for Law Reform James Browne said. He suggested this may involve increasing prison time for people convicted of possessing a knife with intent to cause harm.

The current maximum sentence here for knife possession is five years, one of the highest in the EU.