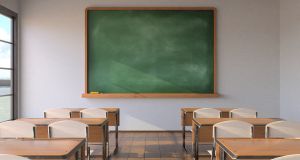 Empty classrooms: “For more than 80 years our education system has been fragmented by history, meaning that it now lacks any sense of agility.” File photograph: iStock

One of the few benefits of the school closures is that it has highlighted several structural problems in our education system. These problems run deeper than fraught industrial disputes and have their origins in the late 1930s, when the new Constitution allocated the Department of Education a role that was second to that of the dioceses and religious orders.

Quite apart from the positive and negative impacts of that decision, the reality is that the department, in responding to crises, does not have the same level of operational control of schools that is common in other jurisdictions. The plan to partially reopen schools in early January was illustrative of this fact.

In his letter of January 5th, chief medical officer Tony Holohan recommended that schools only reopen for vulnerable students and the children of essential workers. Despite the inclusion of students who had access to special classes/schools, most vulnerable students would not have been able to return to school, including those that live in fear of abuse or in extreme poverty, those that have additional needs but who do not have access to a special class, and those who live in cramped conditions such as emergency accommodation, halting sites and direct provision centres. Likewise, the department’s plan made no provision for the children of essential workers.

Given the context in which the department operates, it would have been difficult to meet Holohan’s recommendations. Obstacles included the challenge of gathering the data necessary to profile and locate these students, in schools that they neither own nor run, and, had the students been found, the inability to flexibly deploy physical and human resources across the system.

In other words, would it have been possible to spread vulnerable students across schools given that the State is neither the employer of most teachers that it pays, nor the owner of most of the schools that it funds?

For more than 80 years our education system has been fragmented by history, meaning that it now lacks any sense of agility. In contrast to highly integrated State systems, ours is characterised by a multiplicity of patrons, management bodies, unions and representative organisations. As a result, the negotiations, necessary to reopen schools, were made more challenging.

Another issue is the department’s difficulty in communicating comprehensive planning documents in a timely fashion. Whether stemming from a lack of resources, initiative overload, rigid bureaucracy or a failure to synchronise policy across departments, the impact on school managers and their communities is real and often significant.

One example during the summer months was the failure to produce a school reopening plan until late July. In just a few weeks, principals and boards were required to understand and purchase PPE; advertise for, interview, recruit and induct extra teachers and cleaners; carry out minor works with appropriately sourced contractors; create a new timetable; ratify a raft of policies and procedures, and reassure staff and students alike.

Widely seen as brutal and inflexible by students, the over-reliance on rote-learning means the exams are of limited medium-term benefit to students

For a school like ours, in temporary accommodation, additional challenges existed. In our case, it was also necessary to locate and negotiate leases for additional makeshift classrooms on two external sites, a church hall and a hotel ballroom.

While significant financial resources accompanied this plan, the unnecessary rush took a significant toll on school leaders across the country. The same plan could have been announced months earlier.

The coronavirus crisis has also drawn into sharp focus other issues of systemic unfairness. These include the fragility of early years education, run outside the State system; the prevalence of large class sizes; the inadequacy of resources for students with additional educational needs; the technology gap experienced by students in different school settings; different funding models for primary and secondary schools; the inadequate funding of mental health services; and perhaps most importantly, the negative impact of the current Leaving Certificate exams.

Widely seen as brutal and inflexible by students, the over-reliance on rote-learning means the exams are of limited medium-term benefit to students. The recent defence of its quality and fairness by politicians is wholly understandable, given the stress being experienced by sixth-year students, but it does not negate the fact that it is out of date as a mode of assessment and has a polarising impact on our education system.

Cumulatively, these issues point to a final fundamental weakness in our system: the absence of a national consensus on the primary purpose of the education system. Highly functioning systems, such as the often-cited but misunderstood Finnish system, have a clear primary aim. In Finland’s case, this aim is to reduce inequality in society – a sentiment that should seem logical in our republic.

With their values-driven vision, the development of their education system has followed an agreed logical trajectory for decades, regardless of which parties were in government. Our system, by way of contrast, is more a filter for third level, than a holistic preparation for individual wellbeing, civic participation, life-long learning and the world of work.

To meet the substantial challenges facing our society, economy and climate, we need a coherent, equality-based system, in which the department has the primary legislative role. This will require all political parties to move away from mere tokenism and towards forging a national consensus on the future of the system, through the mechanism of a constitutional convention.