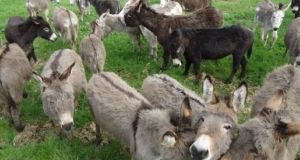 More than 70 donkeys have been saved from being put down in Co Donegal. Photograph: Donegal Donkey Sanctuary

More than 70 donkeys have been saved from being put down after a public appeal to keep a Co Donegal sanctuary open.

The operator of the Donegal Donkey Sanctuary, Danny Curran, and his staff had issued an appeal on Tuesday for funds to keep the Raphoe centre open.

The public responded by donating more than €40,000 in just two days.

Mr Curran said the centre had been facing a financial crisis and the prospect of giving up the 73 donkeys in their care.

The centre, which opened in 2006, has helped rehabilitate and rehome more than 600 donkeys.

The sanctuary had been hoping to raise at least €35,000 in order to secure its immediate future.

Donations have flooded in from across the world for the not-for-profit group, who refuse to turn away any abandoned donkey.

Mr Curran said he was genuinely humbled by the response to his appeal.

“I know people hold a special place in their hearts for animals and donkeys are often animals which are not immediately thought of.

“But I honestly never thought that the response to save the sanctuary would be as good as this. People have just been wonderful.

“I understand times are still tight for many people, but people have dug in and given us small and large donations and we appreciate every one of them.

“I cannot tell you how thankful and relieved we are that the sanctuary will remain open and that we can begin to plan for the donkeys we have in our care.

“The thought of closing the centre and what would happen to the 73 donkeys if we had to do that is something which has given us all here sleepless nights.

“We might get a good night’s sleep now, but we’ll have to be up early in the morning as the work only begins now, thanks to the good nature and generosity of people out there,” he said.

If you would like to help the Donegal Donkey Sanctuary, please visit their GoFundMe page.