Thieves believed to have cut Eir cables before stealing up to €10,000 in cash and cigarettes 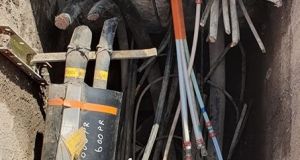 Burglars are suspected of having wiped out broadband coverage for hundreds of homes and businesses in the west of Ireland in an attempt to avoid being detected as they broke into a shop.

A sum of cash and cigarettes with a value of up to €10,000 were understood to have been stolen from Ashtree Stores, just outside Ballinasloe, Co Galway, in the early hours of Saturday morning.

Around the time of the break-in at around 4.40am, a number of Eir broadband fibre cables, accessed under a manhole outside the shop, were cut.

Kevin Keane, who runs Wizard Computers in Ballinasloe, posted a picture on social media of the cut cables and blamed “thugs” for the “major internet outage” which cut off broadband for his mostly-online business.

“My understanding is that a crowd lifted the manhole at the Ashtree, cut all the cables underneath – fibre, copper, everything they found – and broke into the shop next door,” he said.

“It looks like it was all to make way for breaking into the shop, cutting off the alarm or the CCTV or whatever.”

Mr Keane said the broadband outage at its height was “huge”, covering parts of Ballinasloe, Ahascragh, Fohenagh, Mountbellew and Kilconnell.

“I’m running a business here and I’m offline all day,” he said. “A good 70 or 80 per cent of my business is internet-based.”

Mr Keane said Eir advised he might not be back online until Monday.

A spokesman for Eir said the damage caused to its fibre cables was “quite extensive”.

The “majority of services” had been restored by 6pm on Saturday but two fibre cabinets, affecting around 200 customers, remained offline, he said. Service was later restored to the remaining cabinets. The spokesman noted “the cause of the fault was third-party damage and was quite extensive.”

A Garda spokeswoman confirmed it was investigating a burglary at a premises in Ballinasloe.

“A sum of cash and a considerable amount of merchandise was stolen during the course of the burglary.

“No arrests have been made and investigations are ongoing.”