More than 92,000 vehicles examined at test centres in 2019 found to be unroadworthy 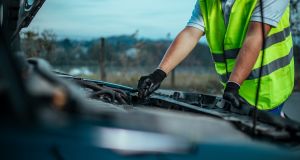 As a result of the implementation of an EU directive on roadworthiness tests on motor vehicles since 2018, all defects are now classified as either minor, major or dangerous. Photograph: Getty Images

One in every 15 cars submitted for the national car test last year were found to be dangerously defective and unsafe to be driven on public roads.

Figures published by the Road Safety Authority (RSA) show more than 92,000 vehicles examined at NCT test centres during 2019 were found to be in an unroadworthy condition.

Although the vast majority subsequently obtained a NCT, a total of 2,791 vehicles were still found to be dangerously defective following a retest.

According to the RSA, tyres in poor condition and problems with brakes are the main reason why cars are deemed dangerous to drive on public roads.

An authority spokesperson said the large number of cars being classified as “fail dangerous” was not surprising.

As a result of the implementation of an EU directive on roadworthiness tests on motor vehicles since 2018, all defects are now classified as either minor, major or dangerous.

“Many motorists are still unaware about the change in classification and there is a need to educate car owners that there are some problems which will have their vehicle deemed unsafe to drive on public roads and that they need to take the issue seriously,” the spokesperson said.

A recent survey by the RSA indicated that 40 per cent of all car owners used the NCT as a diagnostic tool for problems with their vehicles, which the RSA claims explains the higher failure rate for the initial test.

“People need to stop using the NCT to identify problems with their car. They should be getting it serviced regularly by a mechanic as it is a much more detailed examination. The NCT can never be a substitute for a full service,” said the RSA spokesperson.

Any motorist detected driving an unroadworthy vehicle is liable for a fine of up to €2,000 and five penalty points and/or a three-month jail term

Neither the RSA nor Applus, the operator of the NCT, collect information on the number of people who still drive away from NCT centres in an unroadworthy vehicle or who arrange to have their car towed away.

The RSA spokesperson said anyone who continued to drive a vehicle after it was deemed dangerously defective was “irresponsible”.

Any motorist whose vehicle is classified as “fail dangerous” is advised that it is unsafe to be used on the road “under any circumstances”.

A sticker stating “failed dangerous” is placed on such vehicles by NCT inspectors at the end of a test.

“It is illegal for a vehicle to be driven on a public road with dangerous defects which means the driver may incur penalty points and a court appearance if caught by An Garda Síochána,” the RSA spokesperson said.

Any motorist detected driving an unroadworthy vehicle is liable for a fine of up to €2,000 and five penalty points and/or a three-month jail term.

The RSA said gardaí were automatically notified via the National Vehicle and Driver File of any vehicle that was overdue its test by three months.

Such information is also now available to gardaí at roadside checkpoints. They are equipped with hand-held devices for checking on the licensing status of drivers and vehicles stopped.

In addition to the “fail dangerous” vehicles, more than 603,000 other cars also failed the test.

The figures indicate that more than 41,500 vehicles that did not pass the full test were not submitted for a retest.

The RSA confirmed recently it had required Applus to pilot changes to the testing of a vehicle’s suspension.

It follows a €31,000 award by Cork Circuit Civil Court against Applus for failing to spot a faulty suspension in a vehicle, which was subsequently involved in a fatal traffic collision.

A post-collision report found the vehicle to be unroadworthy both at the time of its involvement in a fatal crash near Fota, Co Cork, in December 2012 and when it passed the NCT seven months earlier.

The driver of the vehicle, Cork woman Amanda O’Flaherty (26), was killed after the car veered suddenly into the path of an oncoming vehicle.