Locals ‘shocked’ at dumping of body parts in Darndale 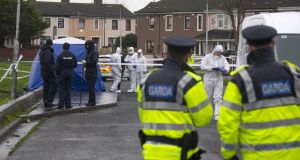 Gardaí at the scene of the discovery of human body parts in a bag in Darndale, Dublin. Photograph: Colin Keegan/Collins Dublin

The discovery of a bag of dismembered body parts on Monday night in north Dublin has been described as a “savage incident”.

The bag was discovered in the Moatview Gardens estate in Darndale shortly after 10pm and is understood to have been found by young people in the area.

A Garda investigation is currently under way following the discovery of the bag, which contained what are believed to be the limbs of a young male.

“It is a savage incident for anyone to end up like that. My sympathies are with the family, it is a terrible thing for any mother or father to wake up to on a Tuesday morning,” he said. “I would implore young people who are involved in things like this to get away from it, there is help out there. We don’t want any more tragedies; the community doesn’t want any more of this.”

Racheal Batten, Fianna Fáil councillor for the Whitehall-Artane area, described the incident as a “shocking discovery”.

She said gardaí “simply aren’t resourced to deal with this level of crime” and called on Minister for Justice Charlie Flanagan to declare “a state of emergency in north Dublin”.

Labour councillor Alison Gilliland said it was “very disturbing that a bag of body parts were just thrown at the side of the road to be found.

“My thoughts are with the families of missing loved ones, who are no doubt in a very difficult position this morning,” she said.

Cllr Gilliland said she and other local representatives are currently compiling a report on the amenities and opportunities available to young people in the Dublin 17 area, which will feed into a local stakeholder forum.

“It has sadly become a culture. Young people are probably seeing there are little alternatives for them and they end up getting involved in gangs,” she said.

“We’re losing too many of them. The community is being neglected and there are so many great people in this community.”

A woman who has lived in the area for over 10 years described the discovery as “shocking”. “I was at home last night when I heard the Garda cars come up the road. I didn’t know what had happened and then one of my neighbours came into me and told me, it’s shocking,” she said.

Another woman living in the estate said the discovery “isn’t the least bit surprising”.

She added: “This is just normal for us here, it’s happening all the time and it’s only getting worse.

“There was a man shot outside of his home last year, with kids and everything. These people don’t care. They don’t fear anyone and this kind of thing will keep happening. The guards can’t even stop these people.”