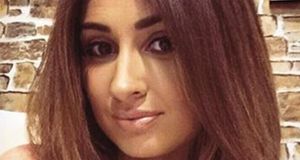 Mother-of-one Nadine Lott died on December 17th in St Vincent’s Hospital where she had been in a critical condition for the previous three days. Photograph: Instagram

A 32-year-old Dublin man is to stand trial accused of the murder of Nadine Lott, who died after she sustained serious injuries in her Co Wicklow home shortly before Christmas.

Mother-of-one Nadine Lott died on December 17th in St Vincent’s Hospital where she had been in a critical condition for the previous three days.

The beauty therapist had sustained serious injuries when found at her home in St Mary’s Court, Arklow, at around 4am, on December 14th last.

The charge was under section 4 of the Non-Fatal Offences Against the Person Act for causing serious harm, which carries a maximum sentence of life imprisonment. He had said “Sorry” when that charge was put to him.

Mr Murtagh was remanded in custody and faced his third hearing, at Cloverhill District Court, on Tuesday when the case was upgraded to murder.

Det Garda Mulhall told Judge Victor Blake he charged the accused on Tuesday morning. He was cautioned, after which “he made no reply” and was then handed a true copy of the charge sheet.

Dressed in a black jacket and dark trousers, Mr Murtagh nodded to family members in the public gallery as he entered the courtroom.

He sat silently, only speaking quietly to communicate with his solicitor Padraig O’Donovan, during the hearing.

Noting the new charge, Judge Blake asked if the Director of Public Prosecutions (DPP) had issued formal directions. Det Garda Mulhall said the directions were for trial on indictment in the Central Criminal Court.

Det Garda Mulhall told the court the assault charge still stands. The DPP had also directed Mr Murtagh could be sent forward on a signed plea of guilty, should that arise.

His solicitor Mr O’Donovan said, “That will not apply.”

The accused was further remanded in custody and consented to appear via video-link for his next hearing at the same court on January 21st. A book of evidence has to be prepared by the DPP

He waved to his relatives as he was escorted from the courtroom.

Mr O’Donovan asked Judge Blake to direct psychiatric and medical attention for his client in custody.

Judge Blake agreed to make the recommendation if it was deemed appropriate.

Due to the nature of the new charge the district court cannot consider bail and an application will have to be brought to the High Court if the accused seeks to get released pending his trial.