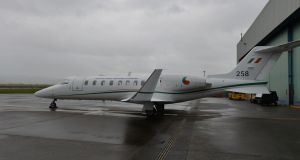 The Government jet, at Casement Aerodrome, Baldonnel. The Government declined to send the jet to the DRC due to concerns about its range. File photograph: Alan Betson

The Defence Forces has ordered officers to prepare to deploy to a troubled region of the Democratic Republic of Congo (DRC) at short notice, raising further concerns about troop safety.

Two Irish officers are currently assigned to the city of Goma in the east of the country as part of the Monusco UN mission.

The security situation in the region has deteriorated significantly in recent weeks due to political instability and the coronavirus pandemic, leading to other EU countries to pull their peacekeepers out of the area.

Earlier this month, the Defence Forces General Staff advised the Government about concerns for the officers’ safety and has recommended they be evacuated as a matter of urgency. The Government agreed but declined to send the Ministerial Air Transport Service, commonly known as the Government jet, to the DRC due to concerns about its range.

Other options which explored were chartering an aircraft or having the officers fly home commercially.

This week the Defence Forces issued an order that the officers originally assigned to replace those in the DRC should be ready to deploy at minimum notice, leading to confusion about plans to drawdown the mission due to the security situation.

“It is increasingly looking like they want to rotate the Irish contingent, not evacuate it,” a military source said.

The order states that the replacement officers must be ready to spend 14 days in quarantine at a military training installation in Ireland before flying out, as per UN guidelines.

If a rotation does go ahead, three officers will fly out and the two officers, a captain and a lieutenant colonel, will fly home, most likely on a commercial flight after leaving their weapons behind.

“Instead of having two officers in harm’s way, we will now have three. As usual none of it makes any sense,” the source said.

The Irish contingent live in a private apartment in Goma rather than in a secure compound, raising concerns for their safety.

Ireland is campaigning for a seat on the UN security council, with the vote scheduled for June 17th. Some senior officers and retired personnel have expressed the view the Government is reluctant to draw down the mission in case it damages Ireland’s chances of a seat.

A Defence Forces spokesman said there is “no change” to Ireland’s commitment to the DRC mission but that any deployment must be guided by UN protocols, access to the mission area and the challenges of the Covid-19 pandemic.

The dilemma has highlighted the Defence Forces’ lack of aircraft capable of repatriating troops at short notice. More than 300 troops serving on the Unifil mission in Lebanon are not able to rotate home until the end of June in part due to a lack of long-range transport options.

The Department of Defence said there is a requirement to extract the officers for a medical assessment as they are now past their initial six month deployment period.

It did not mention concerns about the security situation.

“Both the Department and the Defence Forces are considering all available options to secure the return of these personnel at the earliest possible opportunity. However, there are a number of complexities that remain to be worked through, such as the transport of their weapons and ammunition.”

Returning the officers safely and quickly “takes precedence over any other secondary issue,” it said.

The subject was discussed at a online seminar organised by the Slándáil National Security Summit on Tuesday.

Slovakian ambassador to Ireland Igor Pokojny described how his country’s airlift programme was vital, not just for moving troops but for evacuating civilians from disaster areas. Other speakers suggested Ireland could take part in a pooled air transport programme with other European countries to reduce cost.