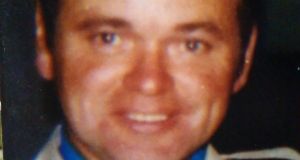 Private Patrick Kelly, who was killed by the IRA as he searched for the kidnapped businessman Don Tidey in Co Leitrim in 1983. Image courtesy Kelly family. 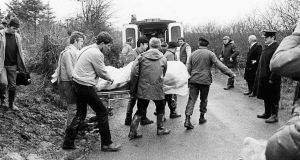 The bodies of Private Patrick Kelly and Garda Peter Garry Sheehan are removed from Derrada Wood in Co Leitrim after they were shot dead by the IRA. Photograph: Pat Langan

The son of the only Irish soldier killed by the IRA during the Troubles has welcomed the acknowledgment by Mary Lou McDonald that his death was “wrong”.

However, David Kelly insisted the Sinn Féin leader must accept publicly that his father Patrick had been murdered.

“It’s murder, it’s as simple as that, and that needs to be explicitly stated because otherwise it’s trying to legitimise the campaign by the Provisional IRA,” Mr Kelly said.

He said he saw “no distinction” between the death of his father and that of anyone else killed by the IRA. Ms McDonald, he said, should acknowledge “these were all murders.”

He also called on the Sinn Féin leader to ensure that anyone within her party with knowledge about the death of his father whould bring that information forward.

Private Patrick Kelly was part of a joint Garda-Army operation attempting to rescue supermarket boss Don Tidey, who was kidnapped by the IRA in 1983 and held in a forest hideout near Ballinamore, Co Leitrim.

Nobody has ever been convicted of either killing.

In an interview with the Sunday Independent last weekend, Ms McDonald said the IRA’s campaign was “justified” and, had she been older, there was “every chance” she would have joined.

Mr Kelly said it was “retraumatising” to read that a potential future taoiseach “would have felt the urge to join the illegal organisation that murdered my father.”

He “totally” rejected Ms McDonald’s “analysis that this was a legitimate war. “My father wasn’t in a war, he was doing his duty, and the man who killed my father has never been held accountable for that.”

Sinn Féin has not responded to requests for comment from The Irish Times.

However in an interview with LMFM, Ms McDonald said that “the loss of a serving member of the Defence Forces, of Óglaigh na hÉireann, the loss of his father was wrong, absolutely wrong, should not have happened in any set of circumstances, and equally loss of members of An Garda Síochána.

“I’m not equivocating, I’m not ambivalent,” she added.

She also said that every life lost was a “tragedy for the family, for the friends of that person, all across the conflict, and I include everybody in that, I’m not selective in that regard.”

Ms McDonald’s comments have been condemned by unionist politicians in Northern Ireland.

The Traditional Unionist Voice (TUV) leader, Jim Allister, said in the North’s Assembly on Tuesday that Ms McDonald had “told the innocent victims of the IRA the actions of the organisation that made them victims were justified.”

DUP MP Gregory Campbell said the IRA’s campaign “was wrong, it was unjustified, can’t be defended and was totally and utterly wrong. That’s what they [SINN FÉIN]need to say and have always failed to say.”

The Ulster Unionist Party (UUP) leader, Steve Aiken, said Ms McDonald’s comments were “an insult to all the many innocent victims of terrorism on all sides of the conflict”.

The DUP MP Jeffrey Donaldson said that for Ms McDonald to “differentiate between one IRA murder and another is quite incredible and requires immediate clarification from the Sinn Féin leader.

“As far as we are concerned, every single Provisional IRA murder was wrong and is unjustifiable,” he said.

“Whether it was a soldier, police officer, man, woman or child, if Mary Lou is going to justify one and not another then she needs to speak further as there are families all across the British Isles who were bereaved by the PIRA.

“A belated acceptance by the Sinn Féin leader that the murder was wrong and unjust would at least be a step forward.”