Need to move away from the ‘language of blame’, says CMO after nine further deaths

Chief Medical Officer Dr Tony Holohan says that NPHET is looking into the possibility of easing restrictions around visits to nursing home residents and older people cocooning in their own homes. Video: RTÉ 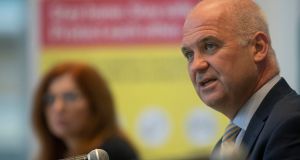 The State’s Chief Medical Officer Dr Tony Holohan is to brief the Cabinet on Wednesday on the current public health advice on two metre social-distancing rules, which some Ministers last week suggested should be reduced to one metre.

At a lengthy meeting of the Cabinet last Friday, several Ministers advocated for social distancing rules to be reduced.

Minister for State with responsibility for disability issues Finian McGrath was one of those to raise the issue, and a minority of Ministers were then supportive of the move, political sources said.

Many businesses have said that they will be unable to reopen unless the social distancing guide of two metres is reduced to one metre.

In the last press briefing on Tuesday evening, Dr Holohan said Ireland needed to move away from the “language of blame” around Covid-19 deaths and that ongoing lessons are being learned in how to respond to the pandemic.

He was speaking in the context of nursing homes and rising public discourse around the disproportionate number of deaths in the sector.

On Tuesday, the National Public Health Emergency Team (NPHET) reported a further nine deaths of patients with Covid-19 in the State, one day after authorities reported no new deaths for the first time since mid-March. There have now been a total of 1,615 Covid-19 related deaths in the State.

Despite a return to mortality reports, Tuesday delivered the lowest number of new confirmed cases since March 13th, at 37, bringing the total to 24,735. Of those, 13 per cent have been hospitalised.

The NPHET briefing came after an Oireachtas committee examining the State’s response to the crisis heard heated exchanges around high levels of infection and death in nursing homes.

There have now been 884 deaths in the facilities, some 54.7 per cent of the total.

Asked to respond to the ongoing fallout, Dr Holohan appealed for society to avoid the attribution of blame. Although he was working and did not hear the Oireachtas proceedings in detail, he said “I think it’s important...that we move away from that language of blame and finger pointing.

“Protecting individuals isn’t a question of blame or identifying the source of who is responsible. And I think that language...is unhelpful.”

He said the response must be about “how we pull together as a country”, solidarity and support. “There are lots of organisations involved in this response. Every organisation has things to learn.”

Asked about the State’s response to the nursing home sector and whether it was left “isolated” as had been claimed by Nursing Homes Ireland, Dr Holohan said that in general there was very early and significant action taken in comparison to other countries.

“A public health-led response which in the first instance had to focus on dealing with community transmission of this virus. There was simply no way of protecting nursing homes or any other institutional setting if we don’t control the spread of this infection in the community.”

He said a number of measures in respect of nursing homes were implemented at an earlier point in the outbreak than other countries, including a blanket ban on visitors two weeks after the first case was identified in Ireland.

However, he said there was no doubt learnings can be made here and internationally. “We are not going to say in any way that we got everything absolutely right. We are all learning,” he said.

Dr Holohan also pointed out on several occasions that nursing homes would have undergone pandemic preparedness before the arrival of Covid-19 with measures including infection control.

HSE’ chief clinical officer Dr Colm Henry said significant resources had been diverted to the sector and that private nursing homes alone had received over €27 million worth of personal protective equipment.

Meanwhile, a further 103 cases of Covid-19 have been reported in meat processing plants in the last week, bringing the total in the sector up to 925.