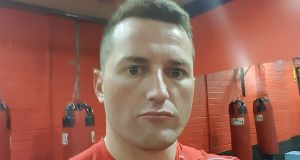 Robbie Lawlor (36), who was closely aligned with one faction in the Drogheda gang feud, was shot in the head outside a house in the Ardoyne area of north Belfast on Saturday.

Police in Northern Ireland investigating the murder of Dublin criminal Robbie Lawlor at the weekend believe he may have been shot dead by a man who owed him money.

Lawlor (36), who was closely aligned with one faction in the ongoing Drogheda gang feud, was shot in the head outside a house in the Ardoyne area of north Belfast.

PSNI and Garda investigators believe he had travelled from Coolock with three other males to enforce a drug debt against a mid-level Belfast drug dealer.

Four males, including a 17-year-old, have been arrested in connection with the murder, including some of those believed to have travelled north with Lawlor.

The males who accompanied Lawlor are from the Limerick area, and have close links to organised crime there. One of them is understood to have links to Limerick gangland figure Wayne McCarthy Dundon, who is serving a life sentence for murder.

Three of the suspects were arrested shortly after the murder which occurred at around noon on Saturday on Etna Drive. A fourth man was arrested on Sunday morning.

“I do not believe that Robbie was in the Ardoyne yesterday by accident. I believe he had some reason to be there, and key lines of inquiry for me at this stage are to establish why he was there and what his connection to the address is,” said Det Supt Jason Murphy on Sunday.

Security sources say one line of inquiry is that Lawlor was shot dead by the drug dealer who feared he was about to be murdered.

Another is that Lawlor was set up by rivals to be murdered in revenge for previous killings in the gang feud which has engulfed Drogheda and Coolock , Dublin, in the last year.

Lawlor, who is originally from Dublin but has an address in Laytown, Co Meath, was the chief suspect behind the murder and dismemberment of 17-year-old Keane Mulready-Woods, whose partial remains were found in Dublin in January. The teenager is believed to have been murdered because of his connections to one of the parties in the Drogheda feud.

The PSNI say Lawlor was murdered by a single gunman, who fired multiple shots which hit the victim several times. The murder weapon has yet to be recovered.

Lawlor’s family have yet to formally identify his body, but the PSNI said “sufficient information exists for us to believe that the deceased male may be Robbie Lawlor”.

The suspects are being questioned in the serious crime suite of Musgrave police station in Belfast.

Gardaí assisting the investigation have carried out a search of a property in Crumlin, Dublin, which they believe may be linked to the murder, while the PSNI search another house in Belfast.

“This was a brutal killing, and I am appealing for the public’s help to bring the gunman to justice. I would like to hear from anyone who was in Etna Drive yesterday, between 11am and 12.30pm, and who may have witnessed the shooting or the gunman making his escape,” said Det Supt Murphy.

“I’m also keen to speak to anyone who can help us trace the movements of a VW Sirocco car, registration YLZ 7052. I believe it was in Estoril Park [Belfast] on Friday and was burnt out in Kingston Court immediately after the murder yesterday.”

Lawlor was considered a major gangland figure and a prominent player in violent feuds in Dublin and Drogheda.

He is suspected of involvement in at least three murders, including the killings of Kenneth Finn in 2018 and David “Fred” Lynch in 2005.

He is also suspected of involvement in a gun attack on the leader of a criminal faction in Drogheda which left the victim paralysed and triggered the current round of violence.

He was warned by gardaí of a threat to his life in December following his release from prison after his acquittal on an attempted murder charge.